Steve Taylor-Bryant delves into the unknown as he breaks down twelve seasons of Supernatural into 12 Top 5 articles.  His top 5 from season five...


Lucifer, archangels, the four horsemen of the apocalypse, Castiel, Crowley, Bobby Singer, loss, mistrust, and of course the Winchester boys. Season five is peak Supernatural. I'm 12 seasons in and whilst there is loads to love in both earlier and later seasons (except season 6 but we'll get to that) nothing tops season 5. Show runner and creator Eric Kripke takes his bow on season five, a season he had planned to be the last, and the entire run plays out like an executive writer having as much fun as he can before his time is up. It's dark, it's use of biblical mythology is at its best, it's funny, Dean especially has some of his most quotable outings, it's cast so incredibly well and with Crowley (Mark Sheppard) and Castiel (Mischa Collins), stepping up to regular from bit part, it is honestly some of the most fun I've had watching television. The ongoing story arc is incredibly well told but the standalone episodes are also effective and deserving of their screen time. All the episodes are great, even the one with Paris Hilton, and on a different day the top 5 may contain different choices. But today it's these 5 gems of comedic action I've plumped for. 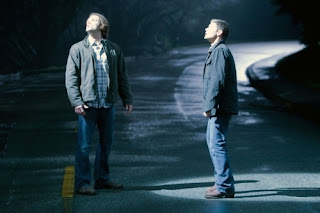 “This ain't the first time you been here. I mean, you boys die more than anyone I have ever met.”

Dean and Sam are killed by the hunters Walt and Roy. The awake in heaven and Castiel contacts Dean and asks him to seek out the angel Joshua. Meanwhile Zachariah is chasing them in Heaven to force Dean to be Michael's vessel. 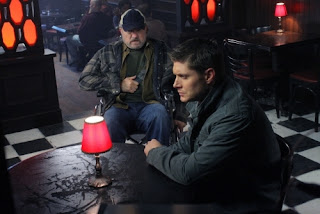 “Thanks. Now, we done feelin' our feeling's? 'Cause I'd like to get outta this room before we both start growin' lady parts.”

Sam and Dean investigate the mysterious case of a young man that dies of old age and soon they find an opposite case of a missing old man that has become younger. They find that a 900 year-old witch named Patrick is responsible, gambling life years in poker games. However, Bobby arrives first and bets twenty-five years of his life expecting to get rid of his wheelchair. He loses and gets older and older, forcing Dean to bet fifty years of his life to save his friend. Dean saves Bobby but ages himself, becoming a very old man. Now Sam is the only hope to save his brother. 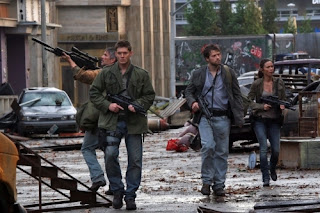 “Y'know it's kinda funny, talking to a messenger of God on a cell phone. It's, you know, like watching a Hell's Angel ride a moped.”

Dean moves to Kansas City and receives a phone call from Sam, who tells him about his meeting with Lucifer and asks Dean to hunt together with him; however, Dean refuses the request. Soon Zachariah brings Dean to 01 August 2014, i.e., five years in the future, to show him the effect of his refusal to permit Michael to occupy his vessel and Dean realizes that the world has been practically destroyed. Dean (2009) meets with Dean (2014) and he learns that he has lost his humanity and the world is crowded with people infected by the demonic deadly virus Croatoan. Furthermore, he sees that Lucifer is occupying Sam's vessel. Back to 2009, Dean changes his attitude, but not the way Zachariah is expecting. 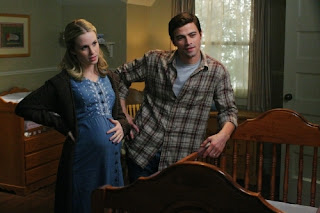 “Dean. It's Valentine's Day. Your favorite holiday, remember? I mean, what do you always call it? Unattached Drifter Christmas?”

Anna comes to Earth to kill Sam to avoid that Lucifer uses his vessel. However, Dean and Castiel protect Sam and Anna travels in time to kill John and Mary Winchester before they get married and conceive Sam. However Castiel sends Sam and Dean back in time to protect their parents. But Anna is very powerful and the Winchesters are helped by an unexpected angel. 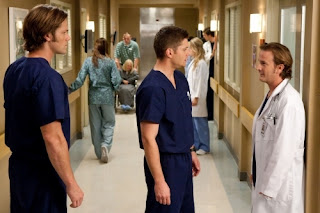 “Calm down? I am wearing sunglasses at night! You know who does that? No-talent douchebags! I hate this game! I hate that we're in a procedural cop show, and you want to know why? Because I hate procedural cop shows! There's like three hundred of 'em on television, they're all the freakin' same, it's "ooh, a plane crashed here," oh shut up!”

Sam and Dean catch up with the Trickster, who sends them through a dizzying montage of TV show parodies, inviting them to play along with their "roles" or be stuck in "TV Land" forever. But once Castiel shows up, the boys get an idea as to what the Trickster might be hiding and eventually come up with a surprising answer.