Steve Taylor-Bryant delves into the unknown as he breaks down twelve seasons of Supernatural into 12 Top 5 articles.  His top 5(ish) from season seven...

Oh, that’s better. It appears that season six was a blip because season 7 is back to the great levels of entertainment that I had enjoyed from the first 5 years. Castiel is consumed by all the souls hes released from Purgatory and declares himself a new God, the deadly Leviathans, God’s first creations, are unleashed, Bobby is a spirit and there is of course Sam and Dean, Crowley, Meg, a ton of fighting, Kevin Tran the prophet. The excitement was better each episode than the previous year, the writing the strongest it had been for a long time, and the cast seemed to revel in the improvements taking more risks with humour, character changes, and action. Along the way alliances are formed, and broken, and the brothers go through possibly more than they have in any other season. Picking a top 5 was bloody difficult for many reasons, it was the first season that had increased episode numbers, Castiel was brilliant in most episodes but I can't make it all about him, every episode was breathtakingly good (maybe because I’d watched season 6, but hey, what the hell right?), Charlie, and due to all of the above, and my indecision between two episodes in particular, here's my top 6… 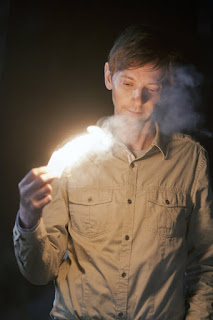 “Garth Fitzgerald IV: Hi, Tess. You want to tell me what you saw tonight? Or maybe you'll talk to...
[puts on a sockpuppet] Mr. Fizzles! I'm your friend! Yay!”


Garth heads to Junction City, Kansas, to "garth" a ghost that has killed a teenager and he burns his bones in the cemetery. When he is ready to return, the brother of the victim is also killed with the same "modus-operandi" and Garth calls Dean and Sam to help him to get rid of the supernatural creature. Soon they realize that the ghost has been sent by a revengeful man to seek revenge against his former business partners and can only be seen by drunken people. 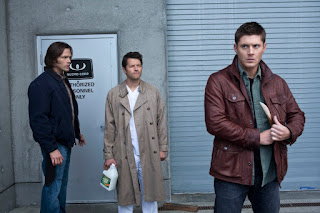 “Castiel: Well, Dean, I've been thinking. Monkeys... are so clever, and their sensible in that they leave the skins on the bananas that they eat. Is it really necessary to test cosmetics on them? I mean, how important is lipstick to you, Dean?”

Dick Roman summons Crowley and makes a deal with the demon, asking him to give blood from a common demon to the Winchester brothers instead of his own. Meanwhile Dean and Sam get the bone of a nun and they just need Crowleys blood to prepare the weapon to vanquish Dick Roman. Dean and Sam also burn Bobby's flask so his ghost can rest in peace. EWen Crowley arrives, he tells his agreement with Dick to Dean and Sam and gives sample of his blood. Is Crowley betraying Dick Roman or the Winchester brothers? 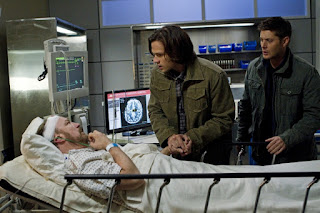 “Bobby Singer: I was a kid! Kids ain't supposed to be grateful. They're supposed to eat your food and break your heart, ya selfish dick! You died and I was still so afraid I'd turn into you, I never even had kids of my own.”

As Sam and Dean race the clock on a high-stakes mission, Bobby seeks the help of an unlikely old friend to solve one of the most personal cases of his life. 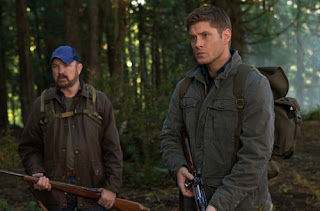 3 – Episode 9: How to Win Friends and Influence Monsters

“Dean Winchester: I think you pissed off my sandwich.”

Dean, Sam and Bobby head to a town in New Jersey where the remains of locals have been found after the attack of a creature that they believe might be the Jersey Devil. Dean and Sam interview the Ranger Rick Evans, who seems to be stoned, at the Big Gerson's restaurant, and then they have lunch with Bobby. Dean eats the Big Gerson's sandwich with three different meats and soon he shows strange behavior. Sam and Bobby learn that the sandwich is affecting the locals and they decide to investigate the supplier, and discover that the locals are part of an experiment of the leviathans led by Dick Roman. When Bobby is captured by four leviathans, Dean and Sam question how they can rescue Bobby. 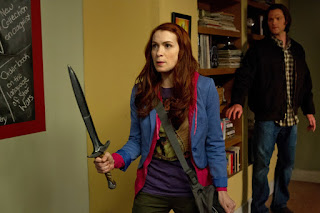 2 – Episode 20: The Girl with the Dungeons and Dragons Tattoo

“Charlie Bradbury: [Holding up her hand in the Vulcan salute] Peace out, bitches.”

Dick Roman assigns his employee, the hacker Charlie Bradbury, to decode Frank's hard drive. Meanwhile, Dean and Sam discover that Dick has the HD with the information about the leviathans, and they meet Charlie at her apartment and explain what is happening. Charlie promises to retrieve the content of the HD to the Winchester brothers and to snoop into Dick's e-mails in his mailbox and deliver them to the brothers. 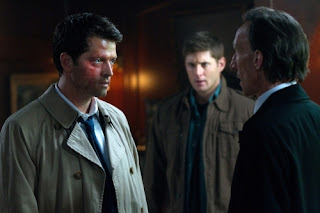 Castiel doesn't kill Sam, Dean or Bobby, but warns them not to interfere in his business. Assuming his new role as God, Castiel sets out to right some of the wrongs in the world. Dean decides they should find Death and make him stop Castiel, but the former angel is one step ahead of them, leaving Dean to face a very angry Death. Meanwhile, Sam struggles to deal with the broken wall in his head.