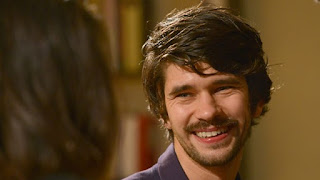 
Ben Whishaw will star as Norman Scott opposite Hugh Grant, who was recently announced as playing the disgraced MP Jeremy Thorpe, in Russell T Davies' major three-part drama A Very English Scandal for BBC One.

A Very English Scandal is based on the bestselling book by the author and former Arts Editor of the Evening Standard and Sunday Telegraph, John Preston, that tells the shocking account of Thorpe who, in 1979, was tried but acquitted of conspiring to murder his ex-lover Norman Scott.

Whishaw is BAFTA and Emmy Award-winning actor, known for his acclaimed Hamlet for Trevor Nunn, Danny Holt in BBC Two's London Spy, Freddie Lyon in BBC Two’s The Hour – and as Q in the James Bond films Skyfall and Spectre. He has starred in numerous other feature films including Perfume: The Story of a Murderer, I'm Not There, Bright Star, Brideshead Revisited, Cloud Atlas, The Lobster, Suffragette and The Danish Girl.

Russell T Davies says of the casting, "It’s a dream come true, to work with Ben. One of Britain’s finest actors playing one of history’s most fascinating men."

Piers Wenger, Controller of BBC Drama, added “Ben Whishaw is an extraordinary actor and we are thrilled to announce he will star opposite Hugh Grant in this scandalous real-life story for BBC One. I cannot wait to see this first-class British duo bring Russell’s powerful scripts to life.”

A Very English Scandal is the shocking true story of the first British politician to stand trial for conspiracy and incitement to murder. It is the late 1960s, homosexuality has only just been decriminalised and Jeremy Thorpe, the leader of the Liberal party and the youngest leader of any British political party in a hundred years, has a secret he's desperate to hide. As long as his ex-lover Norman Scott is around, Thorpe's brilliant career is at risk. Thorpe schemes and deceives - until he can see only one way to silence Scott for good. The trial of Jeremy Thorpe changed society forever, illuminating the darkest secrets of the Establishment. The Thorpe affair revealed such breath-taking deceit and corruption that, at the time, hardly anyone dared believe it could be true.