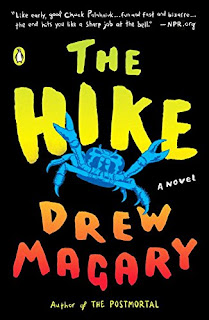 Nate Mackenzie takes the road less travelled as he reads The Hike by Drew Magary ...

At one point while reading Drew Magary's The Hike, I closed the book, exasperated. Mentally and physically taxed, I laid the book on my bedside table and took a moment to myself. With a few deep breaths, I cleared my head, picked it back up and began to read again.

On an overnight business trip, Ben finds himself lost on a wooded path; a path which turns into an extended journey that seems as if it will never end, with machinations set forth by a mysterious entity referred to only as The Producer.

The magic (and irony) of this book, of Magary's skill, is that you as the reader begin your trek with the belief that you are taking a leisurely stroll through its pages. I can not overstate how absolutely wrong that assumption is.

I stumbled upon The Hike when it was suggested by Amazon's creepy algorithms based on my love for Ernest Cline's Ready Player One. The reviews promised an "epic fantasy saga, with elements of folk tales and video games", surrounded by a very human, relatable storyline. I quickly found out that, whereas Ready Player One is 'epic' in the millennial context of the word, The Hike is very much an epic in the classical sense. Ben, the flawed protagonist, is a kindred of Odysseus or Frodo Baggins more so than he is akin to Wade Watts (Ready Player One) or Harry Potter or Jack Sparrow.

Throughout Ben's journey, you are dragged along, helplessly devoted to seeing it through. Loneliness, despair, frustration - these are the emotional landmarks you battle on the path as you read, emulating Ben's abandonment and perpetual perseverance.

The Hike feels like a story Magary wrote for himself, never intending to share it with the world. Like a journal he scribbled in madly, under the influence of whatever vice, discovered in an attic years later by a curious grandchild and published post-mortem.

Magary is known for his hilarious views regarding sports, but his insight into the human condition -and that which, to me, reads as self-introspection; a revelation of himself to us, the unworthy reader- attaches to the bouyant parts of The Hike a surprising amount of weight. As soon as he lulls you into a false sense of ease, Magary slashes at your preconceived notions of self with precision.

Ultimately, The Hike can be enjoyed as a light summer read, if you're inclined to overlook the fathoms of profundity as mere filler. In doing so, however, I'm not sure the ending would have quite the impact that is intended. I can say with all sincerity that few books have ever punched me in the gut the way The Hike did in its last few pages. In the same instant, Magary welds within you a connection as indelible as a blood oath and simultaneously leaves you feeling completely undone.