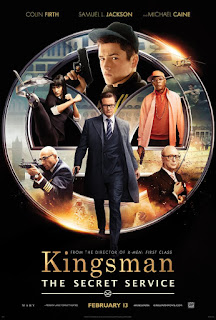 With Kingsman: The Golden Circle in cinemas now, Kraig Taylor-Bryant takes a look at the original film, Kingsman: The Secret Service (slight spoilers)...

In case you are unaware of the concept/plot of the film “Kingsman: The Secret Service”, here is what IMDb have to say about it:

A spy organization recruits an unrefined, but promising street kid into the agency's ultra-competitive training program, just as a global threat emerges from a twisted tech genius.

That’s putting it incredibly simply. This plot doesn’t really give the audience an idea of what they’re in for but, hey, it’s not like this is the only time we’ve been led to believe one film is completely different to what it actually turns out to be. Take Deadpool for example, the advertisers made it seem like some kind of love film to get as big a viewership as possible and of course, they did. So no, the plot description’s not perfect but it gives you an idea of the story, which is always useful. And yes, Kingsman hits you with unexpected scenes of action, comedy and ends in a surprising manner in itself (I won't say exactly why). The film also gives the viewers acting of the class of Michael Caine, Mark Hamill, Jack Davenport and Colin Firth, not to mention Samuel. L. Jackson playing the lead villain who seems strangely scared of blood for a bad guy. Just by hearing these names you’re probably curious to watch the film if you haven’t already.

Now you might be wondering what I personally thought of the film. Well, for me, it had a very “Men in Black” feel to it (without the aliens) with a bit of “James Bond” as well. What I liked most about this film was that all of the characters did not have the same typical British accent you usually hear in a lot of blockbuster films featuring British characters. Of course, you get the typical agents that sound like this simply for the professionalism, which I feel lures the audience into a false sense of security about the genre of the film in a good way. But you also get the main character that the plot follows, who has a typical London accent. Admittedly it sounds a bit off to me but I’ve never actually lived in London so I can't really comment on that. But anyway, the irony in how violent the characters in the film are, as this completely goes against the polite British stereotype, is just brilliant, the fact that these agents are just savage to the point at which they ask their recruits to shoot a dog is just fantastic (not that I condone shooting your household pet) as it’s something different and unexpected. This film tries to apply itself to multiple genres and succeeds as it provides the comedy, the action and the mysteriousness that we usually feel when watching a Bond film, to keep the audience engaged throughout.

So let’s get to the big spoilery bits of the article then shall we? The characters themselves were enjoyable and the characters that did die in the film were really unexpected as the typical concept of a film is for the main protagonist’s mentor to die and leave them with motive to do good for the world. Well… this kind of happens, and then some. So the fact that we are first introduced at the opening credits to explosions and the death of the main character’s father really gives the audience a feel of what they’re getting into and the deaths, of course, don’t stop there. This event soon after, leads to us witnessing one of the Kingsmen slaughtering a gang of what appear to be Russian thugs (correct me if I’m wrong). But we then proceed to see said Kingsman get sliced in the head by a woman’s sharp high heels. Of course the sheer ridiculousness of the concept of having heels as a weapon quickly gives the audience a hint of the comedy aspect of the film, which is also backed up by the fact that, around this time, we see one of these Kingsmen get into a bar/pub fight with a group of people purely because they called him a name.

So you would think that the plot would lack in such a film that tries to keep comedy and action in the same film but, to my surprise, it holds up excellently. The most unusual part is that I believed in the villain’s cause, I understood why he was doing what he was doing and the fact that you can actually understand the motives of one of Samuel. L. Jackson’s stunts in a film is an achievement pulled off by the writers, Jane Goldman and Matthew Vaughn, in itself. I think what was really brilliant was the fact that the action continued to be serious but it’s the characters’ reasons for fighting, and the fact that certain people in particular were fighting, that really kept all viewers interested and happy as some could be laughing was others could be too engaged in the events of the film to laugh. Which really is why the film was a success in my opinion, there is more than one emotion that viewers can feel during action sequences in this film. Of course you see something similar in films such as “Worlds End” but the fact that, because you see so much seriousness in Kingsman, the comedy is unexpected when it hits you (if it does) during the action sequences, which are put together perfectly through the camerawork.

Now of course there is a flip side to Kingsman as there is to any film and, for me, it was simply one character that I hated, not because she’s a girl or because she doesn’t fight in the film enough (exactly), but because she is irrelevant to the storyline. The character known as “Roxy” is the one that really disappointed me. She was pretty important to the events of the final act but, the fact is, the plot would have worked without her. If she was there as a friend, and we had time to see a friendship of sorts form between her and the main protagonist known as “Eggsy,” then maybe we would feel a bit more tense in the scenes of which she is in danger and if we really got to see her skills more in their training, then we would understand how vital her role is to the plot of the story. But the fact is, there are so many characters already in this film, that I just don’t think there was room for us as an audience to see this. Perhaps if she gets better introduced in the second film, we would see her as less of a “side character”.

After watching Kingsman: The Secret Service, I am definitely looking forward to the second film and what direction the film will take in the future. I’m not entirely sure as to if it would be a good idea to make more than two or three of the Kingsman films though, as we all know that the Fast and Furious films have been going on for a bit too long themselves, so every film series has its time to reach to a conclusion. Of course it does seem to work for the Bond films so, overall, I simply hope that the producer knows what he’s doing and gives its new found fans something that continues to engage and entertain.