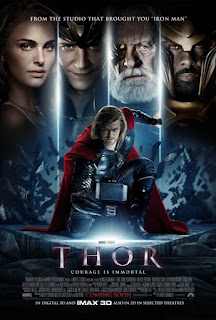 Kraig Taylor-Bryant does a superhero landing into some of the Marvel character films, starting with Thor...

To prepare myself for the upcoming Marvel films (Avengers Infinity War, Thor Ragnarok. etc.) I have decided to write a review of films of some of the characters that are to be featured in the next Avengers film, starting with Thor.

So here’s an overview from IMDb to summarise the plot of the first Thor film:

The warrior Thor (Chris Hemsworth) is cast out of the fantastic realm of Asgard by his father Odin (Anthony Hopkins) for his arrogance and sent to Earth to live among humans. Falling in love with scientist Jane Foster (Natalie Portman) teaches Thor much-needed lessons, and his newfound strength comes into play as a villain from his homeland sends dark forces toward Earth.

Personally I feel that the mentioning of the love interest part is not really important but it’s a good enough definition. What I love especially about this film is that it not only sets morals for any growing up kids that may watch this film with their parents, but also the fact that all of the characters seem to be very three dimensional in the sense that you can understand the reasoning behind every character’s actions.

One character of the film in particular that I found interesting was Loki as I understood him as a character and I really empathised with him, I mean who else would be annoyed if their sibling stole all of the glory and pride that your parents felt for their children? Of course anyone would feel power hungry after having spent so long being ignored and disrespected as we see at the beginning that Thor doesn’t listen to him, Thor’s friends laugh at him. I’m not saying that this justifies starting a war with an entire race just to impress your father, but didn’t his brother, Thor have a similar hunger for war to begin with? Speaking of, lets discuss Thor’s change in personality.

The fact that, to begin with, Thor is committing unnecessary acts of violence makes you question what kind of king he will become. But after thinking that his father is dead (due to deception from Loki) after his banishment, he starts to feel as if he needs to redeem himself in the world by being kind and this develops into a permanent trait of his that every wise king needs, to be kind. This would of course encourage younger viewers of the film to be polite and kind to be the best type of hero, as of course, most kids like to pretend that they are their heroes and act like them.

Following this theme, one of the lines that I found most clever was the use of the line, “get him to the healing room.” Yes it doesn’t sound like the most important line to the plot, but the fact that it is Thor’s father that tells them to help the one that is injured tells us that he cares more about the fact that one of their own is injured than the fact that they retreated from a fight. The fact that Thor does not say anything of this suggests that he is consumed by the desire for violence that he is too pre-occupied in yelling at his father over a chance to wipe out the frost giants than protecting his friends. Obviously we see how he has changed when he gets back to Asgard from New Mexico when he tells his friends to get Thor’s friend known as “Volstagg” to the healing room. This shows that he now sees helping others as a priority over destroying their enemies.

It’s not just the people that had a huge impact in the film itself. I felt as if the hammer was a character in itself as it is central to the plot of this film in the sense that it represents the kindness and honour that every user needs to posses such an object. To think even deeper, the fact that it is a hammer that Thor uses is even more significant as a hammer is typically used to build things, such as buildings or shelters, which protect people, so in a way this hammer also represents protection. Not only this but buildings can help to form communities that bring people together, and with this hammer, the user could help to bring peace to all of the “realms” by bringing them together. At the start of the film, it seems as though Thor only sees his hammer as a weapon with only one purpose, to destroy but towards the end of the film we see Thor use it to protect those he cares about when facing the destroyer in New Mexico. We even see at the start of the second film that he uses it to bring the planets together as opposed to seek out war.

However, Thor also seems to see many actions as ones of violence when he first appears on Earth, such as when he wakes up in the hospital and attacks the doctors. We also later see this when he tries to get the hammer, to pick it up, this could be seen as ironic as he commits needless acts of violence to get to the hammer when it was such an act that got him banished in the first place.

I do hope that we see a little more of Thor’s newer personality/righteousness but at the same time I hope that we see something else out of Thor. If you have seen the Thor Ragnarok trailer then you will know that Thor is likely to show a bit of his glory hungry side when he faces the Hulk. I would personally love to see this side of him again for this moment.