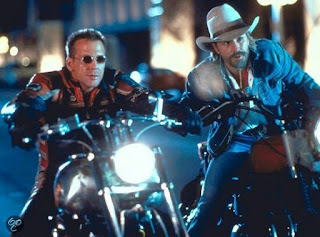 For our Guilty Pleasures celebration day Steve Taylor-Bryant goes back a while to 1991 as he  remembers Harley Davidson and the Marlboro Man...

"It's better to be dead and cool, than alive and uncool"


Two lone riders and childhood friends, the rough and silent Harley Davidson and the ragged sun-baked cowboy Marlboro, assemble once more when they learn that their favourite hangout and the place where they grew up, the notorious Rock 'n' Roll Bar and Grill is facing imminent foreclosure. For this reason, against the preposterous demands for a new contract, the two lifelong buddies in unflinching determination to win back the bar, they will decide to hold up the corrupt bank's armoured car, unbeknownst to them that its cargo is not money but a new lethal and highly experimental street drug: the Crystal Dream. Now the bank wants it back and they are unstoppable. Is everything lost for Harley and Marlboro, the two well-meaning but amateurish thieves?

1991's Stinker Award nominated film from Who's Your Caddy? writer, Don Michael Paul, and The Phantom director, Simon Wincer, is the sort of project you just wouldn't get made anymore without casting Michael Pena and poking a comedic finger at a bygone era. It's a "real" man movie, a throwback to when we were all cowboys or bikers fighting to save our local pub or bar, and on the surface shows a testosterone fuelled world that in reality we don't really live in anymore. But that's okay because as time has gone on Harley Davidson and the Marlboro Man has drifted from a place where it took itself far too seriously, to a more fictional base on which to watch from. Yes, it was macho action and had a slightly brainless plot but if you scratch beneath the surface there is a lot to enjoy.

Casting wise, no matter how daftly named or dressed the characters, Don Johnson and Mickey Rourke will always give you value for money. As Harley and Marlboro you had two actors that supposedly hated each other, they still haven't worked together since, and yet you got a real chemistry from them. Rourke has been quite disparaging about the film in the media and went off to be a drug fuelled boxer shortly after but you wouldn't know that just by looking. He was his usual charming, snide and funny self and mixed well with Johnson who approached his role maybe with a bit more professionalism. They did the film for the paycheque but they in no way phoned in a performance. A back up cast of Tom Sizemore (Chance Wilder), Tia Carrere (Kimiko), Giancarlo Esposito (Jimmy Jiles), Chelsea Field (Virginia Slim), and even a Baldwin brother in the shape of Daniel playing Alexander, made for interesting viewing and the ensemble of late 1980's and early 1990's stars managed to keep somewhat of a lid on things to stop the ludicrous story boiling over into farce.

Harley Davidson and the Marlboro Man showed you could take the outdated and idiotic, add some brand awareness and product placement and still make a movie that is endlessly enjoyable even 26 odd years later. Or at least that's how I view it, you might wish it had won the Stinker Award.