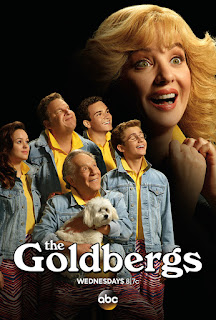 The management accepts no responsibility for how ancient you feel after reading this article as our young whippersnapper Kraig Taylor-Bryant explains the appeal of 80's set comedy The Goldbergs to the youth of today...

Adam Goldberg! Nope, he’s not the founder of the Goldberg beer, he is the boy that recorded his family that grew up in the 80s, which happens to be one of the best things to happen to television.

In the 1980s, geeky Adam uses a video camera to document his family's crazy life. His mother, Beverly, is overprotective and lacks boundaries, while his dad has a hot temper and finds it difficult to parent without screaming. Rounding out the clan are Adam's terrifying sister, Erica; his older brother, Barry, who has middle-child syndrome; and the family's beloved grandfather, Al "Pops" Solomon. Pops is responsible for wild antics, including offering drinks to Barry and teaching Adam about the ways of love - which create more chaos in an already high-strung family.

Dan Levy and Patton Oswalt help to bring the Goldberg family’s story to not only those who grew up in the 80s, but also those who didn’t.  I think what’s so brilliant about the show is that everyone spends their days mostly just focusing on future technology and not so much appreciating the past and how it influenced our way of living today. Such as the incredible advancements in technology that allowed us to see what kind of films could really be made in a time where only video tapes were the source of living/reliving the events of such classics as Empire Strikes Back and Indiana Jones. Not only this but it also has its clever way of influencing the lives of families living nowadays.

The fact that producer Dan Levy changed “Eric” into “Erica” in the TV show gives every member of the family a character to relate to. I myself can relate to multiple characters, such as Adam and his desire to watch films and play video games, and the father, with his desire to be lazy and sit around all day. As for my other siblings, my sister can relate to Erica, my younger brother can also relate to Adam as he, like Adam, loves toys, and my older brother can relate to Barry, with his desire to do things such as get a car/learn to drive or, in his case, get a tattoo. Through these characters, the viewers can buy into the lessons that the characters themselves are learning towards the end of each episode. Of course, even the parents can learn something from the Goldberg parents, whilst appreciating the 80s themselves, such as in a lot of the episodes, the mother has to learn to not get involved so much in their child’s important events in school, such as picking a college or going to some “dance”.

The comedy in the show can appeal to a variety of audiences, however it can be hard to understand some of the humour without understanding the pop culture references such as Back to the Future, Star Wars, the joy of going to a video store. These are things I have been fortunate to experience in my lifetime. The humour presented throughout this show can make those who don’t understand these, curious enough to look into such things, which would help people better understand why it is that only those who lived in the 80s have such an appreciation for it (with me as the exception).

One example of one of things greatly appreciated by some that lived during this time is the video game systems such as the Nintendo 64 and the classic games that came with it such as Zelda. The joy of completing a game can come to those who lived in the early 2000s like me, as we still had those sort of games when I was growing up with my PlayStation 2. I experienced a similar joy to that Adam felt in the show after completing Zelda after playing it for six months. I myself spent a while trying to complete a game I had that was titled “The Legend of Jack Sparrow” on which I was stuck simply because I couldn’t figure out how to pass the first level for some reason. I suppose that isn’t as relatable, but the feeling of completing the game was all too familiar to me when I saw Adam near completion of his favourite game of the time. Unfortunately it does seem like many games these days don’t have as much challenge as the likes of Zelda, as a lot of them now simply involve investing tonnes of money in micro transactions or requiring hours and hours of investment to even have a chance against the real life players, thereby giving the player more frustration than enjoyment in their progress towards being better at the game. What’s worse as that there is no ultimate goal in a lot of newer games. Of course you can get to the maximum level/ rank or whatever they call it, but you can still carry on with little effort and succeed. It would seem that players in the 80s would then proceed to purchase the next game in order to continue their journey and feel pride in doing so, whereas those who will continue to buy the next “Call of Duty” or “Battlefield” now will do so simply so that they can keep up with everyone else and fit in, which is I suppose what every kid/teen of every century wants to do but this should not have to cost someone as much money as it does. 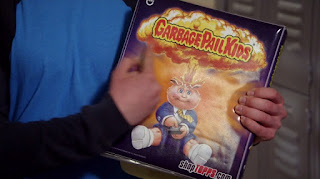 Now that the game rant is over let's discuss the love that the Goldbergs felt in visiting a video store to rent a videotape. I felt a similar feeling when I used to go to the film store known as “Blockbusters” in which I used to borrow DVDs and play the demos for the newest games on their PlayStation 3. And save up for the next Star Wars game for my Xbox. So I did feel that joy in going out to get such things, mostly because they aren’t usually as crowded as supermarkets, which is what I loved so much about them, the calm atmosphere in which there was no rush to pick your favourite film or game that I’m sure came to Adam Goldberg at the time. When I do look back on such stores in the Goldbergs like “Video Heaven” I can appreciate such old places that inspired places like Blockbusters, so in a way, those video stores influenced my life as well. Videos themselves even did for a short time as we all know that DVD players weren’t the cheapest technology in the early 2000s and so I used to watch all my favourite classic Disney films on an old video player for a while which, for me, is another thing to relate to through the Goldbergs.

Of course there are many things of the 80s that I can’t understand, such as the need to look cool back then through looking as much like a woman even if they weren’t one. The mother's hair stands out more than the others and other mothers that are featured in the show seem to have similar hairstyles but are also different and look ridiculous in comparison to simple hairstyles of nowadays (excluding some teenagers with a desire to have a badger looking thing sit on the front of their head). And similarly of course some of the hair seems to look different on the males, particularly the guy that works with Murray (the father) at the furniture store, there are aspects of these styles that looks very 80s but are hard to point out exactly what it is about how they look, of course their clothing may play a major part in this.

In terms of music however, some of it may seem a bit ridiculous but, I admit, it has a lot more rhythm that most of the music listened to by the youth nowadays. I suppose that's how my older brother links to Barry Goldberg also, with his desire to like the same music as many other people his age which I personally don’t care about (although I will gladly argue about it with them for a long way). The ridiculousness of the music and the use of slow motion also comes across as those people thinking that they look so incredible when looking back from now, we can see that this really doesn’t seem to be the case. This mix of effects and editing creates humour for the audience and does make people feel a similar joy to that felt by people that lived in the 80s.

But there are many experiences presented through the Goldbergs that people did in the 80s that I wish I had the chance to do when I was younger such as go roller skating which I may have enjoyed, given enough practice, of course I can't really say for sure but they definitely did things that aren’t as popular nowadays.

Anyways, I really do applaud the Goldbergs as it helps me understand why they appreciate what they had as I appreciate some of these things similarly and the reasoning for the mother’s actions can help the audience better understand their own mothers. The comedy is what really makes me relish this time, though, as it brings a message across that this time was a time to enjoy and value as it started many advancements that we don’t appreciate as much as we should, such as video games consoles and streaming services.