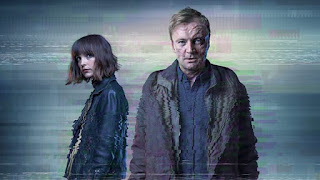 Read an interview with the director of Rellik, a new crime thriller coming to BBC One next week...

Rellik is a crime thriller - but one that turns the serial killer story on its head (hence the backwards title, ha see?) Starting at the end, with a prime suspect caught, the series moves backwards in time through the string of gruesome murders, gradually unravelling the truth.

Enigmatic, unrelenting and charismatic, the show follows DCI Gabriel Markham as he is propelled in an obsessive hunt for a serial killer who left a mark on him both physically and mentally. As the clock ticks back, and Gabriel’s personal and professional lives unfurl, it explores the painful psychology of a man disfigured, while the shockwaves from the crime ripple out in reverse.

In the first episode, Gabriel is torn between his conviction that they already know who the killer is, and the seemingly irrefutable evidence found at the last murder scene. Meanwhile, there are fears that Gabriel’s intimate connection to the case may be skewing his professional ability to track down the perpetrator, and his personal relationships continue to impact on his work as he is given an ultimatum to face. The rest of Gabriel’s team are dealing with the conflict of their own personal and professional lives as they launch a thrilling, high-stakes operation to catch the killer. But are they targeting the right person? Gabriel makes one final connection in a desperate, last-ditch attempt to get to the truth. DCI Gabriel Markham and his team are working to find a serial killer, when a break in the case leads them to a potential culprit.

Can you tell us the general premise of Rellik?

The interesting thing about Rellik is that the storytelling goes from effect to cause, so you are constantly being taken back in a case, and trying to piece together what the relevant pieces are and how they are going to impact when it comes to the denouement. You have a structure where the first five hours are told literally in reverse order so you will go back three or four time jumps per hour. You’ll meet a character, see something happen to them and then you’ll go back in time and start to understand why that may have happened.

That has an immediate interest on a crime thriller level. It is very interesting because you start reading the clues in a reverse order, but it also has a bigger emotional sweep within the story because the lead character, played by Richard Dormer, has been badly damaged by an acid attack, and so what you come to realise is that you are also heading back to the moment that that happened to him.

It has a heavy psychological impact to every level of the storytelling, and the trick in editing is to keep the audience balanced between getting satisfied in terms of the trail of breadcrumbs they are following in a backwards direction, while also understanding this man and finding out more about his past and what he did to deserve this - or did he deserve it, and what happened. And then the final episode shuffles right back to the present and tells you what happens because of that.

Could you give us an insight into the genesis of the story and how this came about?

The Williams brothers, who wrote The Missing, are fascinated with the way time works and the impact of time. They came up with the story of Rellik thinking how cool it would be to tell a story in backwards fashion. It is very much hashed from the darkest recesses of their amazing imagination. It was an incredible feat to write it because it really defies a lot of the normal conventional storytelling; other things start to jump out and become more relevant.

Making the six episodes was a real journey into what that [reverse chronology] does. From the audience's point of view I think there's still a desire to read it forwards, even when they know it's going backwards. That has been a very interesting editing process: you have an audience who is quite wrong-footed at times and they get invested.

It has the potential to be quite a deep rewarding experience watching it, where things challenge you and wrestle you a bit and aren’t as you expected. It is a very exciting watch.

What were the most challenging aspects of filming?

The main challenge was how went about filming the piece. We felt it would be a dangerous exercise to reverse the order of filming and switch it around during the post production. It felt like cheating. We also felt we needed to be in control of how it was working in a backwards fashion.

Other challenges included the part of London we were portraying. The way that we showed the city was very particular. We somehow settled on a couple of streets out by Silvertown east of Canary Wharf as being the heart of the piece. There is something quite interesting and juxtaposed about that community, some of the new parts of the community do not match up with the old and big roads going through the centre. 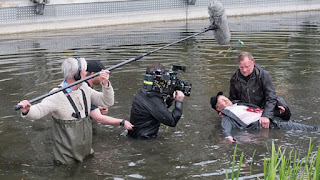 Was there a conscious decision to ration information?

There is an argument for giving some of the story upfront to an audience to go, "ok this is the story so don’t worry about that just worry about how you experience it". Also there were certain things that in normal conventional storytelling that you would hold back and try to make it cooler. With this, we would be very loud about it and focus on the how rather than the what. It was about finding a way of holding the audience’s hand throughout, but at the same time scared them a little bit, challenge them and make them see it differently without pushing them off.

How do you decide which scene you reveal in reverse?

Jack and Harry had quite strong places where the story jumped, so we stuck to them as they felt right for us. It is important how you tell the audience that the time has stopped now, and we are going to take you back 11 hours or take you back six hours. We found a very strong visual motif for that which relates to what is around it.

Can you describe the relationship between Gabriel and Elaine?

During the making of Rellik what has stood out or surprised you the most about the series?

I have been amazed by the effect of the rewind and the backwards storytelling and how you perceive that. It is not straightforward and it can effect you at different times, depending on how you approach the story. It feels to me it has opened up storytelling to reveal other things to the audience and make them more aware of other aspects as it is constantly challenging their understanding. So it can penetrate at times a little bit harder. That has to have been the main storytelling investigation which I have never done before.

In terms of the making of the piece I am always really excited to shoot London and I love how London appears in it. As a city it seems to get better and stronger and weirder and stranger. There was something extra in it for me due to the involvement, development and ongoing work I have on Luther. And this version of London feels like a more twisted, distorted, digitally weird world, a little bit further out than the Luther world. It has been interesting to just explore and push the city a little bit harder and go into another zone.

Is there any footage you shot that has since surprised you in a good way now in post edit?

You are constantly evaluating and your feelings about the way shots work and how things develop is ongoing in the edit. It is an ongoing process. We are finding some interesting ways to use music with this piece that in a more normal reality you wouldn’t do. We have this electronic artist called Clark who is scoring for us. It feels like a much larger playing area than normal, so we are really looking at a score that sits within the picture, that comments on the picture and has a dialogue with you rather than just an emotive engagement. It has surprised me how well that is working. It feels it is getting a very strong soundscape attached to it.

Were there any moments off camera that you will cherish?

I think you are always surprised and amazed by how versatile and committed the crew can be. Especially when you are doing long gruelling days, the weather is bad, people are working through the night and yet there is still a great sense of humour and people are still creating and coming up with solutions to problems. The camaraderie over a long period of time is intense. You are indebted to each other.

Images and info - BBC
Email ThisBlogThis!Share to TwitterShare to Facebook