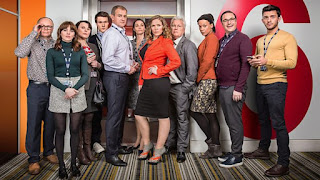 It turns out that there was film in the camera after all, therefore W1A is set to return to BBC Two for a third series of the award winning comedy written and directed by John Morton...

This is the year in which the BBC’s Royal Charter is up for renewal. The charter renewal process gives the BBC an opportunity to question everything it does and ask the question whether there is any point to doing any of it anymore. At the heart of this process is the charter renewal group, chaired by Head of Values Ian Fletcher (played by Hugh Bonneville).

Working alongside Ian in order to help him reset the dial for everyone in the corporation and shine a new light on that dial, or at least shine the old light but with a new bulb so nobody can be in any doubt where the dial is or have any excuse for not being able to read what it says are Anna Rampton, Director of Better (played by Sarah Parish); Simon Harwood, Director of Strategic Governance (played by Jason Watkins); Siobhan Sharpe, Joint CEO of FUN Media (played by Jessica Hynes); David Wilkes, Commissioning Editor Primetime Factuality (played by Rufus Jones); Izzy Gould, Development Executive (played by Ophelia Lovibond); Will Humphries, Assistant to Ian Fletcher (played by Hugh Skinner); Lucy Freeman, Head of Inclusivity (played by Nina Sosanya); Neil Read, Current Head of News and Current Affairs (played by David Westhead) and Tracey Pritchard, Senior Communications Officer (played by Monica Dolan). 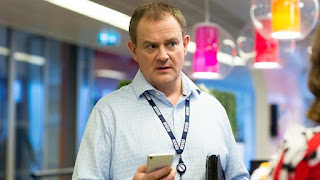 Find out more about W1A in this Q1A (see what I did there? Oh never mind) with Hugh Bonneville, just released by the BBC...

What can you tell us about your character and this series of W1A?

Ian Fletcher’s bedside reading is currently 'The Sinking of the Titanic and Other Psychological Conditions' and 'Optimism in a Post-Truth World'. So he is very much keeping a positive outlook while at the same time testing the emotional lifeboats.

Is life getting any easier for Ian?

I think to say that life is getting easier would be an overstatement, but often within overstatements are kernels of truth and frequently at the nub of a kernel can be found the essence of possibility. Options are there to be explored for Ian, some will be more positive than others but ultimately he has a sense of loyalty to those on the bridge with him.

This is an area, like that of photographs of lost pets, that Ian keeps close to his chest. While certainly romance is something he would consider, really the job comes first. It would be unprofessional of him to spend time in the engine room when really his role is to be on the bridge avoiding icebergs.

You have played Ian for five series now (in predecessor series Twenty Twelve and W1A), how long does it take to get back into character?

As well as conventional immersion methods and chanting, I tend to use the Patsy Rodenberg grunting technique in my quest to locate Ian.

By lunch time I have usually found him.

How do you find working with writer and director John Morton?

John is a very good director who has been handed a complete turkey of a script by whoever wrote this stuff and he struggles manfully against the odds on a daily basis. On a more serious note, I have nothing but admiration for John, a man who doesn’t get out much but who has a superb ear for the meaningless drivel many of us use when pretending to communicate.

What’s your favourite storyline of the series?

The escalating crisis within the mind of Anna Rampton is a great thread to follow. We know her as an ice maiden but somewhere inside there is a 14 year old panicking to get out. The lengths she goes to put herself in Ian’s path, particularly when he has his cycling outfit on, is very funny. And I love the fact that in the denouement she tries to present Ian's destiny as a fait accompli.

Is there anyone you particularly enjoy playing opposite or watching them work?

Hugh Skinner's character has a vocabulary of about four words to play with but Hugh (Skinner) uses them with such precision; he's immensely skilful and makes it look effortless. When watching Jessica Hynes you think at first she's sculpting jelly then suddenly it sets and it’s sublime. Who do I like acting opposite? "They're all marvellous, darling."

Why is W1A so popular?

Some people misconstrue it as a satire about the BBC. It's not, any more than Twenty Twelve was a satire about the Olympics. It's actually just a framework for seeing characters who are on the whole incapable of achieving what's in their job description. Some of the characters are idiots, some are endlessly doing battle with idiots - and I think we can all identify with those situations, whether we're on the fundraising committee for the village cricket pavilion, or in President Trump's cabinet.