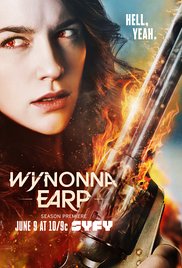 Our pisky turns Earper and hopes to gather A Few Earpers More as Romeo Kennedy writes about Wynonna Earp...

Upon entering the fictional locale, Purgatory, somewhere in the American mid-west, a rather optimistic sign welcomes you to the town and written underneath are the words “You’ll never want to leave.” These words are especially true if one is of the demonic persuasion but also true for the many, many Earpers out there.

But I’m getting ahead of myself here.

“Uh oh, here he goes. On one of his long rambles about something.” I can hear you, yes you at the back- see me after class.

Anyway, where was I? Ah yes.

I am, of course, talking about the fantastic T.V show, Wynonna Earp.

Demon killing, gun slinging, whiskey swilling would be some of the words to use in summing up the show, but my friends, it is so much more than this. This is a show that is a must-watch for any fans of Buffy, and although the show-runner, creator, writer, and producer, Emily Andras is highly influenced by the deeds of the slayer, Wynonna Earp should be judged on its own merits. And to this writer and many Earpers, its merits are many and glorious.

Starting life off as a comic-book created by Beau Smith, Wynonna Earp has been around for a number of years off-screen doing her thang, and lo it was prophesied by the great seers of television that a T.V show must be made (That’s how these things work, right?) And whilst the comic is going strong with the recent release of the Season Zero arc, the show has created something wonderful altogether.

I first caught the show on the UK channel Spike in its first season last year after I saw a tweet on my timeline from author, Paul Cornell, and I’m paraphrasing the tweet here but he said something like, Wynonna Earp is the genre show you should watch. Luckily the Gods were on my side and I managed to catch the first episode on repeat just before the second episode aired with the mindset of, "if I don’t like it I won’t watch the rest."

At the time I had no idea what it was about I had never come across the comics before, but I had a sort of idea as to what it may be about (So not a clue then?). I am of course familiar with the famous Wyatt Earp and Doc Holliday and Tombstone etc I even had a book about famous gunfights of the Wild West which I adored, but I digress. So I went into it with an open mind. Two seasons later and I’m totally hooked, and my friends, it has happened. I am a proud Earper.

Shadow ops, revenants, a curse, an ageless Doc Holliday (Yes, that very same Doc Holliday) and a kickass hero, the one and only Wynonna Earp herself (played by the fantastic Melanie Scrofano.) Plagued with a curse which affects every single heir of Wyatt when they reach their twenty seventh birthday, Wynonna must take-up where all before have left off and take down the demons who have risen again with the help of Peacemaker, which was once her ancestor’s and has the supernatural ability to kill revenants and other spawns of evil. 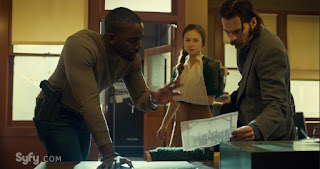 It is a great responsibility being the heir and the wielder of Peacemaker, and not a gift one can simply return to the shop, even with a receipt but, with the help of her sister Waverly (played by the wonderful Dominique Provost-Chalkley,) an agent from the shadow ops organization Black Badge, Deputy Marshall Xavier Dolls (Played by Shamier Anderson) of course Doc Holliday his merry self (played by Tim Rozon) and police officer Nicole Haught (Played by Katherine Barrell) Wynonna has a team around her that will follow her to the ends of the earth and help her rid Purgatory of any underworld nasty that may emerge, and as most of the demons that are already in the town can never leave thanks to the Ghost River Triangle, so the demons walk among them each and every day and like with most evil they don’t all come out at night. Hell is other people but Purgatory is damnation, especially if Wynonna is on your tail.

I’m not going to spoil the show for you if you haven’t seen it but I will say that, whilst season one establishes the characters and the stakes but also poses many questions, season two (the finale of which aired over here on the 29th August 2017) answers some of these questions and delivers more delicious Purgatory flavoured mysteries and devilish demons along with some fresh faces and old favourites. And even though season one is brilliant from start to finish, season two sees a television show that is more of an evolved beast. Just like a Pokémon except a bit more shooty.

As a character Wynonna Earp is a flawed human being but a good person with some tough decisions to make. Throughout both series she has some fantastic lines that Melanie Scrofano absolutely nails and Wynonna’s humor is used perfectly in the most direst of situations.

Of course each Earper has a favorite character or characters but it really is so hard to pick favourites with a cast of characters that are so wonderful and each and every one has moments that as a viewer makes them a joy to watch.

Yes, Wynonna Earp is a genre show, but it is a show that holds relationships at its heart. Be it an LGBTQ romance, or sisterly love. Wynonna Earp shows that family is not necessarily the one you are born into but it is the one that you craft around you, even if you are a badass demon slaying hero, the love from those that surround you shapes you and helps you complete the innumerable tasks that you will come up against, they are the people that when there is total hell-up you need but look next to you and see them, and know that no matter what they will be there, by your side till the end

And that for me is what Wynonna Earp is all about.

I, like many of my fellow Earpers was thrilled when it was announced that the show has been renewed for a third season, which will be aired next year (Sooo far away) but in the meantime there are still things to be Earped like the fantastic podcast Tales From The Black Badge (@WynonnaEarpPod) and all the fantastic discussions, fan-art and of course the comics which should hopefully sate my appetite between now and season three.

And a note on Earpers.

Honestly, any fandom can be quite daunting and scary but the Earper fandom is quite possibly one of the most loveliest. They are a bunch of lovely people. Inclusive, accepting, supportive and just all round good eggs those and those whom I have had the pleasure of conversing with have been absolutely delightful. They are passionate about Wynonna Earp and spreading the Earp love which is what fandoms should all be about. Andras’ herself credited Earpers for the show’s third season renewal.

To return to the start of this piece, and to the matter of the sign welcoming you to Purgatory.

It’s true, once you enter Purgatory and the world of Wynonna Earp, you will never want to leave.

(This article is dedicated to all those who make Wynonna Earp happen be it cast or crew. Thank you for making this wonderful television show, and may its life be long and glorious.)