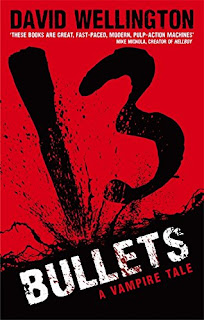 It's DAY 15 of David Ames' Vampire themed Hallow-vent Calendar as he counts the days until our favourite spooky celebration of the year - HALLOWE'EN! Behind today's window is the book Thirteen Bullets...


Over the past fifty years, the Vampire genre has been flooded with new material. The latest trend infused the market with supernatural teen romances where vampires are just misunderstood Abercrombie and Fitch models, patiently waiting to propose to a strangely normal, yet also misunderstood young girl. I genuinely enjoy all types of vampire stories and can honestly say that I didn’t even hate the Twilight series, although they barely qualify as vampires. In a world where this kind of story has been repeated time and again, causing the material to become stale, it is always wonderful to find something new. Enter David Wellington and his wonderfully new take on the vampire genre.

This series of books begins with what I consider a modern vampire classic: Thirteen Bullets. This novel is a tour de force, full of amazing new takes on classic vampire lore and enough gore and violence to really bring the vampires back into the horror genre. His creatures are hulking, muscle-bound masses of beastly flesh and they don’t have fangs per say. Instead Wellington has filled his vampires’ mouths with rows of razor sharp teeth, much the same as a shark, and very reminiscent of Steve Niles and Ben Templesmith’s classic comic 30 Days of Night.

I don’t want to ruin anything about the book as it is one of my favorites, but I will lay out the basic plot structure. The book begins years before the actual plot, when a group of US Marshalls is tracking a criminal, believed to be one of the last vampires in existence. The world in which the novel takes place is very similar to our own, but the existence of vampires is known to the population. The opening scenes follow Marshall Jameson Arkeley, a noir-themed, hardnosed detective who cares for little else than the destruction of all vampires. The prologue to the novel is his last police report, providing amazing detail into the case and the outcome.

After the prologue, the novel jumps forward into the future, where vampires are believed to be extinct. Pennsylvania State Trooper Laura Caxton has encountered a suspicious vehicle at a DUI checkpoint and when the suspect flees, she inspects the car, finding at least three bodies slaughtered in the trunk; the arm and hand of one continues to move although the person is dismembered. Arkeley steps in, taking over the case and deputizing Caxton to join him in his pursuit. She is introduced to Justina Malvern, the last remaining vampire in existence and from that moment forward, her life will never be the same. As more vampires and their rotting thralls, known as half-deads, appear, Caxton and Arkeley must face up to a new horror, as of yet unimagined in their world.

The thing that makes this book and its subsequent sequels (99 Coffins, Vampire Zero, 23 Hours, and 32 Fangs) amazing is that Wellington has reinvented major aspects of the vampire lore. Not only do his vamps have mouthfuls of razorsharp teeth, once they are turned they begin to lose all semblance of their humanity. They lose their hair, all pigment in their skin, and their ears begin to grow into points. These vampires also NEED to stay in a coffin for a completely badass reason: they die each night and their bodies completely decay into a soup of guts, sinew, maggots, and dead skin only to be reborn each evening, completely healed of all previous wounds.

To become a vampire, a victim must truly accept the curse of the vampire into their soul. After they have made that bargain, they have to take their own life. If they do not, they will not come back as a vampire. The half-deads are the corpses which the vampires can reanimate. As they are unnatural, they tear at their faces until all that is left are strips of skin. Also, because they are an abomination to nature, their bodies decompose at a much faster rate. Along with this power, they can also manipulate people psychologically with certain psychic traits, torturing victims and trying to convince them to accept the curse.

Lastly, vampires are nearly impossible to kill. They do age, somewhat, but as they do, their need for blood increases by a shocking degree. They rely on younger vampires to go out, gorge themselves on blood, and then return to regurgitate the blood into their coffin. Vampire skin, when one is gorged on blood is near impossible to penetrate and only when they regurgitate the blood are they even remotely vulnerable.

With this incredible mythology and writing that feels wonderfully cinematic, if you are a fan of vampires, Wellington’s series is for you. I have read the entire series multiple times and I always enjoy myself. This Halloween, when you need a break from films, check out this novel and enjoy something that adds and furthers a genre that I hold so dear.
Follow David on Twitter @TheDavidMAmes