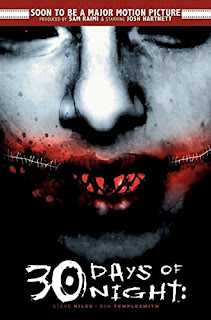 It's DAY 17 of David Ames' Vampire themed Hallow-vent Calendar as he counts the days until our favourite spooky celebration of the year - HALLOWE'EN! Behind today's window is the graphic novel 30 Days of Night...

Few things have done more to endear me to the vampire genre than comics. There are amazing works of graphic fiction which depict vampires in such an amazing way that novels and even films aren’t able to contend. Works like Buffy the Vampire Slayer, I, Vampire (the reissue for the new 52), American Vampire, Bite Club, and Life Sucks all do wonderful things with the genre. At the head of this list there is one series which stands head and shoulders above all: it is Steve Niles and Ben Templesmith’s career defining work 30 Days of Night.

This graphic novel has everything you would possibly want out of a horror comic. The story is spellbinding and the artwork is incredible. The concept is new and fresh and wonderful. While the film adaptation is decent, this book is really where you must go if you want to truly understand the 30 Days of Night universe.

The story begins in Barrow, Alaska, at the edge of the arctic circle, where the sun will soon set and not rise again for 30 days. A stranger approaches the small town ahead of a cadre of vampires who plan to use the 30-day darkness to go on a feeding frenzy. At the same time, there is another ancillary story about a group of people aware of the vampire plot, who plan to fly to Barrow and finally obtain proof of the existence of Vampires. As the vampires descend on the small town, the people are helpless. Only with the help of Sherriff Eben Olemaun and his wife Stella are a small group of survivors able to last against the onslaught. An elder of the Vampires, Vincente, hears of this plot by a younger vampire, Marlowe, and travels to stop the bloodshed. What results of this tri-way collision of forces is a wonderfully macabre and brilliantly creepy ending to a genre-defining work. I don’t want to give any more away than I have to. Just know that if you are tired of constantly romantic and metro vampires, this book repaints them as the monsters they used to be.

The writing of the novel is wonderful. Niles knows how to perfectly craft a story and dialogue that feels ultimately real and believable while still maintaining a strong level of horror, which is hard to achieve in the comic format. His dialogue between characters comes across as honest and his story takes plausible turns. There is no deus ex machina or any other bullshit story element. In fact, the ending happens purely out of desperation and just so happens to pay off. Read the work and then dive into Niles’ other work, especially the rest of this series and his Criminal Macabre series which is also amazing.

Now, for me as a comic reader, the art has to catch my eye. In this case, the art was the major draw for me. I read 30 Days of Night after a long hiatus from reading comics and I was coming from the Jim Lee era of Marvel. What I was treated to in this series is something otherworldly. Creepy, sketchy, loose yet structured. If you have never seen Templesmith’s artwork, just know that you are in for a treat. He is easily my favorite comic artist ever. His work screams horror and the vampires are crafted to draw the blood out of your face and into your heart as it beats quicker. Templesmith, in my world, is a god that all other horror artists seem to fall before. Read some of his standalone work sometime (Singularity 7, Wormwood: Gentleman Corpse). It is funny and sardonic and still has his wonderful artwork.

If you have never been exposed to horror comics before, this is a perfect jumping on point. 30 Days of Night has everything horror fans love: Gore, suspense, relatable characters, and a badass ending which is then spun into multiple other works. Please do yourself a favor and check out the book immediately, before the Halloween season is over.