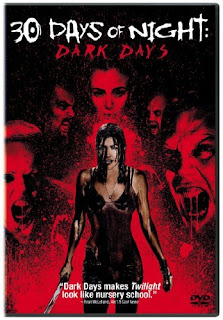 It's DAY 19 of David Ames' Vampire themed Hallow-vent Calendar as he counts the days until our favourite spooky celebration of the year - HALLOWE'EN! Behind today's window is 30 Days of Night: Dark Days...

30 Days of Night, both the novel and the movie, were amazing versions of vampires thrown into a world which is populated with fluff pieces surrounding vampires who shine and only drink animal blood and pine after 16 year olds like creepy pedophilic diamond-clad old men. The 30 Days universe was breath of fresh air. The comic series has spawned multiple sequel series, including Dark Days and Return to Barrow, which were also done by Steve Niles and Ben Templesmith, as well as multiple other series. It also put forth a short-lived, low-budget Fear.Net series that was definitely worth a watch and if you can find it, I highly recommend it. Finally, after a few years of waiting, Sony and Ghost House Pictures released a direct-to-DVD sequel loosely following the second volume of the 30 Days series: 30 Days of Night: Dark Days.

Dark Days begins as Stella Oleson, a year after her ordeal in Barrow, struggles still with the loss of her husband and friends at the hands of a horde of bloodthirsty vampires who descended on her town for 30 days of night. She has written a book entitled, you guessed it, 30 Days of Night, and she is traveling around the country giving speeches and trying to warn people about the danger they are unaware of. At this speech, she asks any vampires who have come to expose themselves or be burned by UV lights she has attached to the ceiling. When they refuse she fries them and causes hysteria. Back at her hotel, a small group of people have been waiting for her, to get her to join them in their quest to destroy as many vampires as possible, as well as an ancient named Lilith.

Reluctantly Stella joins their little unorganized cadre and meets the man who they work with, a vampire named Dane, who has maintained some semblance of his humanity. He wants to see Lilith destroyed as well and so he aids them with knowledge and weaponry. After invading a basement stronghold and losing one of their own, the group discover that Lilith and her clan are on a boat headed back to Barrow to feast once again. The group gains access to the ship and confronts Lilith who has something Stella wants…Eben’s ashes and a way to bring him back.

I won’t give away the ending but I will say that, for a direct-to-DVD sequel, this film is a hell of a lot of fun. It is shot perfectly and acted very well and the movie looks great for something with a much lower budget than its predecessor. The blood may look a little bad here and there and some of the action scenes are not great but overall, this is another wonderful addition to the 30 Days of Night universe as well as the vampire genre as a whole.

Performance-wise, everyone is serviceable at worst and solid at best. No one really stands out but everyone is good in their own right. Kiele Sanchez is a great replacement for Melissa George and she plays the role with just as much vulnerability although she adds the strength of the survival from the first film into her portrayal. She is lonely and untrusting and bitter and it all comes through in her performance. Her supporting cast of allies, Rhys Coiro, Diora Baird, and Harold Perrineau, all play their parts perfectly and are convincing as both scared and determined hunters who have all lost something at the hands of the vampires.

Ben Cotton is a weirdly enigmatic actor in his portrayal of Dane. He is soft-spoken and calm but there is a bubbling under the surface that is never really revealed, although it is hinted at. Lastly, Mia Kirshner plays Lilith with unabashed, terrifying apathy, much in the same vein as Evan Rachel Wood in True Blood. Kirshner is great as the removed, yet twisted leader of the coven and her performance really balloons the third act of the film.

Do yourself a favor and after you have watched the high budget original, pick up this hidden gem and strap in for another great addition to the genre.