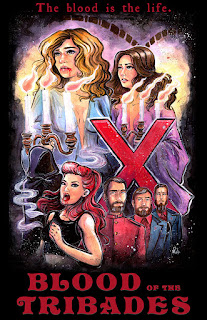 It's DAY 2 of David Ames' Vampire themed Hallow-vent Calendar as he counts the days until our favourite spooky celebration of the year - HALLOWE'EN! Behind today's window is Blood of the Tribades...

You know when you go away from a certain genre or style of movie for a long time and when you finally come back to it, it feels lovely and familiar? The genre that had, at one point become stale and uninteresting, has now been infused with a lovely combination of enjoyment and nostalgia. It is kind of like coming home. This was how I felt when I sat down to watch 2016’s Blood of the Tribades.

Let’s get the plot out of the way first because, honestly, it isn’t really what makes this film so much fun. The story follows two warring groups of people, separated mainly by sex (male vs. female). They are all awaiting the return of Bathor, a Vampire who disappeared thousands of years before. The men have ruled with an iron fist, punishing and ultimately killing the women of Bathory for becoming sexual beings and not following the words and teaching of Bathor. At the same time, the men have become afflicted from a mysterious disease. Only when two Vampire women join together with those who have been outcast do the women finally rise up and begin to take back what is rightfully theirs.

Now that the plot is out of the way, let’s focus on the selling points of this film. It is a throwback to those classic foreign lesbian vampire movies from the 1970s and incorporates all of the tropes of that genre in the same way Black Dynamite did with Blackspoitation films. There is gratuitous nudity of both sexes, some sensual scenes between women, and some hilariously over-the-top acting. It was such a breath of nostalgic air that I couldn’t help but smile as I watched. The acting was appropriately hyperbolic in that wonderful 70s horror style, and the music fell in line with those trends perfectly.

An important aspect of the film is the obvious political message ensconced in the story. It is obviously a response to anti-feminists across the country. The entire film screams the feminist message of down with the patriarchy but it isn’t in a negative, preachy way. All of the female complaints are well-founded and enforced by awesome melodrama in line with the rest of the film. If you enjoy a good piece of classic nostalgia or a socially and politically motivated film, check this out. It is definitely worth a watch.