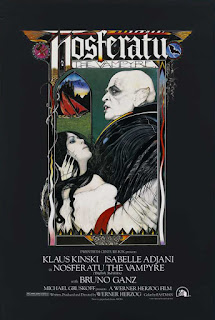 It's DAY 23 of David Ames' Vampire themed Hallow-vent Calendar as he counts the days until our favourite spooky celebration of the year - HALLOWE'EN! Behind today's window is Nosferatu the Vampyre...

As we have been discussing this October, so many vampire movies have been created over the past five decades. The beginning of all this was the brilliant F. W. Murnau’s 1922 silent film classic, Nosferatu. This film stole the plot from Bram Stoker’s Dracula, after Murnau was denied rights to the content by Stoker’s wife. Even so, Nosferatu has gone down in history as not only one of the best vampire movies of all time, but also one of the greatest horror movies as well. This brings us to today’s film. In 1979, famed director Werner Herzog remade the 1922 classic and in the process, gifted the world with today’s film: Herzog’s remake, titled Nosferatu the Vampyre.

This film follows most of the same plot points as both Stoker and Murnau established in their works so I will try to be brief in the plot discussion. Jonathan Harker is a real estate agent who is sent by his boss Renfield to Transylvania to aid a nobleman named Count Dracula with purchasing property in London. While en route to the castle Harker encounters gypsies and other locals who fear the count and do everything to prevent Harker from making the journey through the Borgo Pass and to Castle Dracula. Not to be deterred, Harker walks most of the way before being picked up by a mysterious coach which travels the remaining distance. Once arrived, Harker is introduced to Dracula, a tall, slender, bald, sharp-toothed elderly man. In the following days, Harker is attacked and discovers he is trapped in the castle. IN an attempt to escape, he greatly injures his leg, which prompts the gypsies to take him to a local hospital where his ravings about the count are viewed as side effects from his illness and injury.

Meanwhile, Lucy, Johnathan’s wife, is suffering from dreams and visions of impending doom and the constant lack of letters from Jonathan drives her fear. As she frets over her husband’s life, a ship arrives from Transylvania, carrying tons of long, rectangular-shaped boxes full of dirt. The crew has died mysteriously of the plague which then spreads around London. Meanwhile the count emerges from the ship and makes his move on Lucy, demanding that she give him her love as he has been so lonely for centuries. She outright refuses and what happens in the culmination is both heartbreakingly sad and incredibly brilliant.

First I need to state that this film is shot beautifully. Herzog is normally more known for the themes and ideas his films portray but his eye for shooting and color is something wonderful and it is on front street in this movie. Also, he has managed to really embrace and recapture the strange look that was so prevalent in the original Nosferatu, complete with alabaster makeup and dark, smoky eyes. The creature looks just as he did in the original and all of the characters resemble their counterparts perfectly. Also, Herzog does wonderful things with shadows, further capturing many of the successes seen in the original film. Herzog makes brilliant use of natural phenomenon like water and mist and he really utilizes classic horror tropes to add a sense of impending doom to damn near every scene. The scene where Lucy is at the mirror and Dracula invades her room for the first time is one of my favorites in all of cinema. The film is worth watching for that scene alone.

I personally have an undying love for Isabelle Adjani who plays Lucy Harker. She is absolutely stunning in in her looks and her acting has been celebrated since she began. Her wild, untamed eyes do so much to portray Lucy’s resolve. Bruno Ganz does a remarkable job as Harker, truly giving forth a performance that is a great callback to the original. Other characters are basically throw-away roles but each of the side characters play their parts perfectly. Klaus Kinski, on the other hand, is a wonder. His turn as Dracula is haunting and emotional and terrifying. He has taken what Max Schreck did in the original film and expanded upon it in a number of incredibly successful ways.

IN the end, this story plays with the universe and folklore of the original novel but it does something else which endears it to my heart. Herzog, instead of focusing on the horror of the film, draws attention to the loneliness and struggle of Dracula, a creature who has lived outside of civilization for centuries and simply needs to feel a connection. The ending is a perfect representation of his need to feel something and how he sacrifices himself, in the same way Lucy does, to something greater: to happiness. This film deserves a spot on any horror fan’s shelf and if you haven’t had the pleasure of watching, do yourself a favor and find it, pop it in, and enjoy.