Hallow-vent - Day 29: Kiss of the Damned 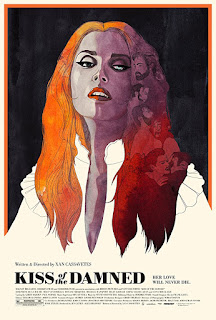 It's DAY 29 of David Ames' Vampire themed Hallow-vent Calendar as he counts the days until our favourite spooky celebration of the year - HALLOWE'EN! Behind today's window is Kiss of the Damned...

We are nearing the end of our time together this Halloween but I didn’t want to go without talking about some modern, low-budget horror films that have come out in the last few years. Today’s movie is one of those gems that Andy Fox, my best friend, gifted me after he purchased it. He wasn’t really a huge fan but I sure as hell was. Today, we talk about Xan Cassavetes 2012 Erotic-Vampire Thriller Kiss of the Damned.

This film begins as Djuna, a beautiful redhead is watching old movies on her own in a large mansion outside of a small town in rural Connecticut. While returning the film the following evening, she meets Paolo, a screenwriter who has been sequestered in the same area to finish working on a screenplay. There is an immediate attraction but it can go no further, as we find out the Djuna is a vampire who lives off the blood of animals. She is worried about what she might do but in making out with Paolo, she accidentally bites him and he begins to undergo a transformation. When confronted, Djuna tells the truth but after expressing his disbelief, she chains herself up and allows herself to truly come out, proving to the young man that she is indeed a vampire. He doesn’t care and he makes love to her right there, eventually asking to be turned.

This relationship is going wonderfully until Djuna’s delinquent sister, Mimi, arrives. She is not one for the “vegetarian” diet, instead using her sexuality to feed herself. She is dark and sexy, dressing mostly in black, and offsetting the angelic Djuna in attitude as well as looks. As they attend to their vampire lifestyle, including a wonderful dinner party with upper class Manhattan socialites who are all vampires, Mimi’s behavior becomes out of control, risking the safety of all the vampires. When she in confronted by Djuna, she shows her superior strength by holding her sister off the floor by her throat, showing just how powerful one could be if they fed on humans. I don’t want to give too much away but the movie, while doing nothing brand new with the genre, does deliver in its own way.

First of all, this film is shot beautifully. For a film that didn’t have the largest budget, it looks and feels like it cost 30 or 40 million easily. The colors are brilliant and the landscapes are gorgeous. The steadycam mixed with the handheld is a great touch and adds a vibrancy to the film itself. The music is heavy handed with electronic keys and noise to help with the old-school feel. Also, the practical effects of both the killings and the burning (you’ll see) are done remarkably well. Honestly, the look of the film is like a well-produced Hammer film and that is also what feeling is captured. It contains a lot of throwbacks to classic 70s European horror but the story is much better: it’s like an adult Twilight in that there is a strange, unexplained, yet super powerful romance, but somehow it feels far more authentic.

The portrayals of characters are all pretty solid. Milo Ventimiglia of Heroes fame plays Paolo and is good as the writer turned vampire. He is strong but not afraid to be vulnerable and, although the lines are sparse, he delivers them well. Josephine de la Baume is both intriguing and strikingly beautiful as Djuna. She is the true heart of the film and while her performance isn’t without its flaws, she really does carry the emotional weight. Lastly, Roxanne Mesquida brings a strange sense of passion and outsider influence as Kimi. She is sexy as hell and not afraid to manipulate her eyes in a very Eva Green fashion in order to get across to the audience just how unhinged she really is.

This film has everything a lower-budget erotic-horror movie should: it is pretty, thought-provoking, and uncompromisingly sexy. Yes, there are a lot of sex scenes, but the nudity isn’t gratuitous and nothing feels forced which is an astounding accomplishment considering the majority of movies in this subgenre of horror. Check out Kiss of the Damned. It is definitely worth it.