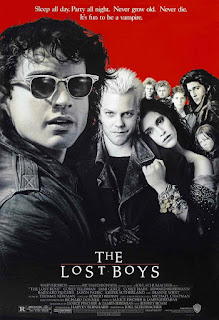 It's DAY 30 of David Ames' Vampire themed Hallow-vent Calendar as he counts the days until our favourite spooky celebration of the year - HALLOWE'EN! Behind today's window is The Lost Boys...

Seeing as this is the last movie on my list of 31 Halloween-themed works for October, I wanted to end on a strong note. Over the past 30 days, you have been witness to me pouring out my love into the 80s and especially 80s vampire movies. What I end with here is the best of the 80s vamp flicks, the swan song of clichéd 80s horror: today we look at Joel Schumacher’s 1987 masterpiece The Lost Boys.

If you haven’t seen this movie and you are over the age of 20, then shame on you. It has everything you would ever want in an 80s horror movie but it also delivers on the psychological level. The film begins as Michael and Sam Emerson and their mother, recently divorced, arrive at their grandfather’s home in Santa Carla, California. They are naturally bored and go to check out the boardwalk, covered in posters for missing people, where Lucy, the mother, gets a job at a local video store ran by a very nice guy named Max. Sam befriends a couple of weird kids, the Frog Brothers, who work at the local comic shop. Meanwhile Michael comes into contact with someone absolutely breathtaking: a girl named Star. He falls head over heels for her even though she appears to be with a tough named David, the head of a local gang.

Over time, Michael becomes ingratiated with the gang who eventually convinces him to drink from a mysterious bottle. That bottle contained blood and soon Michael begins to undergo changes which eventually lead to his full-blown transformation into a vampire. Michael wants to run away with Star but first needs to kill the head vampire so that they can regain their humanity. When he refuses to join the gang, David and the others turn on him and only with the help of Sam and the Frog brothers, who are secretly Vampire experts, can Michael and his family stand a chance at survival.

I don’t want to give anymore away but I will say that this movie is so very much fun. It has good acting, great music, and amazing direction. Also, it contains all of that great 80s schlock that you want. There is terribly hyperbolic side-characters, a sweet misdirection, a music montage, a far too muscular man oiled up in next to nothing wailing on a saxophone, and of course the love story; It is an 80s goldmine. It even has that sweet line at the very end that makes the movie so much more fun.

Jason Patric plays Michael and is convincing as an older teen, angry with his lot in life, and struggling valiantly to fit in. He exudes 80s machismo at certain points but is soft and friendly at others, creating a very nice duality on the screen. Cory Haim is Sam and he teems up with his 80s pal Cory Feldman, Edgar Frog, with their usual gusto and camaraderie. Their friendship is as palpable on screen as it is in any other 80s movie. Other famous actors who appear are Jami Gertz as Star, Bernard Hughes as the grandfather, Alex Winter as Marko (one of the gang), and Edward Herrmann as max. It is a star-studded cast but no one is as awesome in this movie as Kiefer Sutherland who plays David. He is sexy and scary and so intense that when he fully transforms, it is a wondrous sight to behold. Sutherland makes this movie by delivering a villain who is so cool that you want to join him, rather than stay with the “good guys.”

I cannot talk about how much I love this movie without mentioning the fact that there are two sequels, both terrible and fun, but nothing compared to the glory of the original. If you want to watch something that is both well-done and quintessentially 80s, you need to watch The Lost Boys.