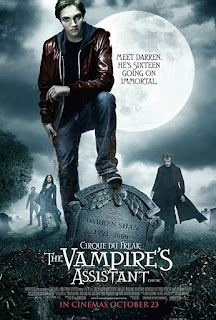 It's DAY 16 of David Ames' Vampire themed Hallow-vent Calendar as he counts the days until our favourite spooky celebration of the year - HALLOWE'EN! Behind today's window is Cirque du Freak: The Vampire's Assistant...

If you have been keeping up this October, you will notice my mad obsession with all things associated with Vampires. They are a weird, macabre passion of mine, so much so that I even watch terrible (and I mean terrible) kid’s vampire movies like Vampire Dog, although I can blame that on my six-year-old. Also, vampires have become so much more than just horror monsters, especially in the realm of young adult literature. Recently there has been an explosion of supernatural YA novels which handle the vampire genre in new and different ways. One of those series, The Saga of Darren Shan, had its first book adapted into a major motion picture. I am referring to 2009’s Cirque du Freak: The Vampire’s Assistant.

This movie follows Darren Shan, a high school student who tells us he is obsessed with spiders. His best friend, the borderline sociopathic Steve Leonard is also obsessed with something strange: vampires. Darren is the perfect son; he gets great grades, has a bright future, and makes all the right decisions. In fact, his overbearing parents make sure of this. The only bad influence is Steve, whom his parents and most of the adults in the school despise as a trouble-maker. One night, against all edicts to the contrary, Steve and Darren visit a travelling sideshow. There, Darren gets a look at an amazing looking spider who does tricks with a mysterious man known as Crepsley. Steve recognizes Crepsley from one of his old Vampire books and proceeds to ask to be turned but the vampire scoffs and has Steve removed. Meanwhile, in an act completely out of character, Darren steals the spider, known as Madam Octa.

From here, the story only becomes more crazy. We discover there are warring factions of vampires: Vampires and Vampaneze. Steve is bitten by Madam Octa and to save him, Darren allows himself to become a vampire and serve Crepsley. He is then thrust into the world of the sideshow where, surprisingly, he feels more at home than anywhere else. Unknown to Darren, a mysterious man named Mr. Tiny is collecting creatures to his side, that of the Vampaneze, and he makes amove for Darren who resists. Instead, Tiny senses evil within Steve and turns him instead. Will Darren be able to save himself, his new friends, and Steve, and help the freaks defeat the vampaneze? You’ll have to watch to find out.

The first time I saw this movie, I hated it. It wasn’t necessarily bad and I have never read the books so I didn’t have anything to compare it to. I think the first time I sat down to watch, I was caught off guard by how much was glossed over. I wanted to know more about the other world in the series but the film didn’t provide enough time to really delve deep into the material. On a second watch, I greatly enjoyed it. We are given enough of a background to enjoy the film, and although I still would have preferred more, I still had a great time. It isn’t going to be gory (it’s a kids film, remember), but the visuals we are given are pretty good.

Performance-wise, the cast does a pretty good job. Sadly, the weakest portrayal is probable Darren, played by Chris Massoglia. He isn’t bad, honestly. He is just surrounded by enough talent to make him the weakest link. Steve is played by Josh Hutcherson with enough vitriol and fire to really portray the sociopathic friend. John C. Reilly is hilarious as a deadpan, multi-century-old vampire. His delivery when dealing with Darren’s inane questions is a great burst of dry comedy.

For my money though, the best performance in the film is a side character, Evra Von, a snake-man played by Patrick Fugit. He is sardonic and funny and his struggling to be taken seriously as an artist is both sad and hilarious. The very first scene we see of him is at the freak show where he tries to perform musically but fails miserably. As is the case with all of his performances, Fugit delivers.

If you have younger kids, they will probably enjoy it quite a bit. I would advise that the viewing age should probably be over 10 or 11 as there are some creepy spots but overall, watch it and enjoy a lighter take on the vampire genre; especially since tomorrow is going to be a hell of a lot more brutal.