Project RPO - The Lord of the Rings 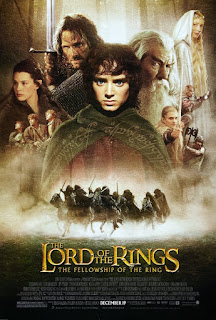 Our small band of Gunters here in The DreamCage universe are reviewing every film mentioned in Ernest Cline's Ready Player One. This week, VentSpleen joins The Fellowship of the Ring with the first Lord of the Rings film ...

I first read Tolkien's Lord Of The Rings trilogy as a teenager and was immediately transported to Middle Earth. Frodo's struggles were my own and I shared Sam's painful friendship with the diminutive hero. When I say his struggles were my own, I don't mean I too bore the awesome burden of transporting a piece of jewellery up a mountain, I mean that I travelled with him. As hard as it seems for kids nowadays to understand but there did exist an age where our lives weren't entirely dominated by on line gaming. We didn't feel short changed because each of us carried with us our very own personalised portable gaming system, one that didn't rely on an X Box Live Gold membership or the latest IOS update from Apple. Like Skynet, this system learnt at a geometric rate and its only limitations were self imposed ones and not down to memory space. Imagination. What an amazing natural ability- to live in worlds created and inspired by Tolkien's own sublime writing. I travelled with the Hobbits to The Prancing Pony, rushed with them to safety from the Ring Wraiths and agonised over the terrible price that Smeagol paid for his greed. I often returned to Middle Earth and as I grew older I accompanied different characters each time. After the aborted attempt to bring to screen Lord of The Rings (technical and budget restrictions rendered the 1978 version largely unwatchable) I had resigned myself to the monumental work being enjoyed in literary form only. But then Peter Jackson happened and, in the words of Galadriel:

"The world is changed. I feel it in the water. I feel it in the earth. I smell it in the air (Elvish translation). Much that once was is lost; for none now live who remember it. It began with the forging of the great rings: three were given to the Elves, immortal, wisest and fairest of all beings. Seven to the Dwarf Lords; great miners and craftsman of the mountain halls. And nine, nine rings were gifted to the race of men, who above all else desire power. For within these rings was bound the strength and will to govern each race. But they were all of them deceived, for another ring was made: in the land of Mordor, in the fires of Mount Doom, the dark lord Sauron forged, in secret, a master ring to control all others. And into this ring he poured his cruelty, his malice,and his will to dominate all life. One Ring to Rule them All."

I was aware of Jackson's previous work but I had always assumed his career would track his horror origins. If you haven't ever seen Braindead or Bad Taste then please do not hesitate to seek them out because it is with these two films that Jackson cemented his Ring credentials as the sort of Uber Geek that was needed to bring Tolkein's work to screen. It needed someone to be OCD in attention to fan detail and the casting needed to be perfect. Us Ringer's would not put up with another onscreen Tolkien travesty and I was suitably happy that Jackson represented a safe pair of hands. My excitement grew and, with each cast announcement, release of set photos and tantalising prop reveal, I just knew that what I would finally see on screen would be the physical embodiment of scenes my imagination had conjured up so many years ago. I can remember 10th December 2001 like it was yesterday and I remember every tortuous minute passing like a Middle Earth century. That evening I had tickets to see Lord Of The Rings: Fellowship of The Ring and on the day of release as well! One does not simply review LOTR, it is folly! so, if you will allow me, I would like to take you back to Bedford 2001 and Screen 1 at 7.30pm...

From the opening Elvish whispered lines by Galadriel to the final scenes, as Frodo pushes the boat out and across the river, Jackson's Fellowship of The Rings is a love letter to Tolkien. For me, it represents what can be achieved with attention to detail, an uncompromising film making vision and a cast that is as dedicated to the project as the Director. Elijah Wood gives a career definiing performance as Frodo and Ian McKellen's weed toting Gandalf every bit the wizard that I fell in love with. New Zealand became Middle Earth and its sweeping majestic landscapes have never looked better, especially when they are accompanied by the muscial genius that is Howard Shore and his orchestral and choral composition perfectly accentuate the onscreen action. So, on the 10th December 2001 I found myself transported to Middle Earth and once again I was a member of the Fellowship of the Ring. Each of the LOTR films is painstaking in its detail and, therefore, it is no surprise that each films running time is longer than 3 hours (especially as I now only ever watch the extended versions) What amazed me that night and every viewing since is the films power to hold me completley in its thrall. More than that, every time Arwen thunders to Rivendell with the Nazgul in pursuit I am on the edge of my seat. I always smile at Pip and Merry's toomfoolery and marvel at the true bond of friendship that is so sorely tested between Frodo and Sam. To watch LOTR is to do a great deal more than view a film, it is to be part of something huge. To revel in what happens when one mans writing genius is given a new lease of life onscreen. How many people discovered Tokien because of the work of Jackson? Who knows, perhaps some of them fell so deeply in love with Middle Earth that they went back to the novels themselves? Just writing this, my own love letter to LOTR, and I will be packing my lembas bread and accompanying Frodo, Boromir, Aragorn, Legolas and the other members of the Fellowship once again. Of all the three films, Fellowship is my favourite because you always remember your first visit to Middle Earth. Truly, there will only ever be one RING to rule them all!