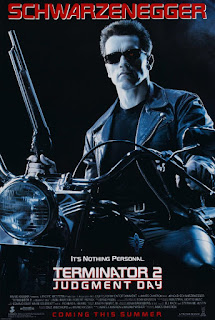 Our small band of Gunters here in The DreamCage universe are reviewing every film mentioned in Ernest Cline's Ready Player One. This week, Marc Nash thinks it's Judgement Day for Terminator 2...

The original “Terminator” film broke a lot of new ground in time-travel, techno-fear sci-fi. Firstly it had a central female character, an Amazonian warrior at that. Secondly it had a convincing AI machine led future apocalypse scenario. Thirdly it even found an acting role that befitted Schwarzenegger’s immobile facial musculature and body beef. Seven years later came “Terminator 2 - Judgement Day” and things have gone a bit topsy turvy.

It starts off recognisably enough, a golgotha landscape of skulls and a kids playground in flames, as the surviving humans battle it out with the unnerving close up metallic skull-shapes of the machines. We have the familiar trope of Arnie landing in the past and getting kitted up, but though he is violent, he’s not actually killing anybody. Not a single heart ripped out of the greasy bikers’ chests as he asks for clothes donations, like it’s for a Church relief drive. Another Terminator turns up and disguises himself as a Cop, but he’s not so dainty, as his hands morph into lethal metal skewers impaling human kebabs. Oh yeah, Sarah Connor is in the nut house and her kid, the future of humanity, is with a foster family. A bit of freaky psychoactively induced making out with dead lovers from her and we’re good to go. Sort of. Schoolboy error Terminators, not only have you intromitted into the equation of the hunt, the resourcefulness of a future military strategist in the delinquent young John Connor, you’ve given even more motivation to the Amazonian Queen, the defence of her child no less, when she will absolutely pull out all the stops.

We’re soon treated to the most edifying sight of two Terminator’s going at one another hammer and tong. The budget is bigger for this movie than the original and they spent it well on the effects. For being a newer model, the T-1000, made of liquid metal, this new guy instantly repairs himself, unlike Arnie’s cable and wire sewing kit from T1 in time out moments. A wonderfully shot chase scene, ending up in a fireball through which the baddie just strolls through unharmed. Arnie explains to John that he’s switched sides, that the future John reprogrammed him to send back into the past to protect the young JC. Trouble is that technology wise, the baddie is far superior, superior but not very bright as Arnie outsmarts him with a deliberate mistake over John’s dog’s name. But at least he’s got his gander up now as he impales JC’s foster father through the mouth and slaughters his dog in what can only be read as the most characteristic human (not machine) motivation of revenge. Meanwhile Arnie has to obey every one of John Connor’s orders, oh no, this could morph into “Kindergarten Cop”.

And so the stop-start protracted chase proceeds on for the two and a half hours and for all the excellent visuals, this is the problem with the movie as a whole. The T-1000 spends an awful lot of the movie off screen. What’s it up to, filing its nails, eating a Happy Meal or practising some hoops? Unlike Arnie’s T101 in the first movie, it doesn’t have to sew itself back up, but instantly regenerates itself. It just seems most dilatory, such as the early grapple scene in a lift, the T-1000 can reblend his head back whole in an instant when a shotgun blast has partitioned it, but he can’t seem to slide through the top of the lift for an age and our heroes escape. Just once is the T-1000 shown running at a fearsome pelt, at all other times he just strolls, takes a look around him and generally tarrying. Also in the climactic fight scene, the T-1000 goes all mission creep and loses focus on his target, again most un-machine like, as he goes after Arnie as if his inferior tech somehow belittles his machinehood by daring to stand up to him.

Oh and while we’re on the incredulous, how about a double deus ex machina to save the day? In chasing down our heroic trio, the T-1000 hijacks a tanker carrying liquid nitrogen, presumably his perceptual matrix doesn’t work as well as Arnie’s, or they just didn’t programme the right chemistry files in it. So while the scene where the shattered frozen bits of T-1000 come together and recongeal is a cinematic sight to behold, you do stretch intelligence when you realise they also happen to have handily crashed the tanker into a molten steel forge.

I think this movie has more developed and coherent themes than T1. Sarah Connor is like a female killing machine with her militarised garb and quickstep determination as she goes after the bad scientist who will unwittingly usher in SkyNet’s domination. But then her human, maternal side emerges in a powerful scene with the prostrate scientist wrapped around by his wife and child. The film develops its theme of human powers of destructiveness set against human creativity and particularly procreative power. Life and death and particularly the value of human life when Arnie’s machine is repeatedly forbidden to take it, yet humans are all too willing to kill one another. Humans are the true terminators.