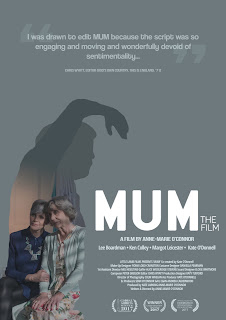 Susan Omand gets involved with family matters as she watched the short film Mum...

Can you portray a lifetime of complex family dynamic in only 14 minutes? Yes, if you watch the short film Mum directed and co-written by Anne-Marie O’Connor.

When Kate goes back to see her mother after a few years away, she realises that far from being ready for a day out, her mum is gravely ill. And no one thought to tell her. So she takes matters into her own hands and although she doesn’t get the day she wanted, she gets the day she needed.

Kate is played by Kate O’Donnell, with younger versions of the character played by Ash Palmisciano and Joe Pearson, and the role feels autobiographical for her, she is so comfortable in it. You could really feel the friction between Kate and Mum’s partner Graham (Kenneth Colley) even before it boiled over into an argument. His obvious discomfort with Kate’s sudden arrival after a long time away to take Mum out for a treat, what he called “high days and holidays,” is exacerbated by so much water under the bridge, things that haven’t been said, and maybe a few choice things that have, that the tension in the house is palpable and it’s clear that Kate is an unwelcome guest. And Kate’s brother Carl (Lee Boardman) does little to try and smooth out the troubled waters.

However it is Kate’s relationship with Mum (Margot Leicester) that lights up the screen, bringing an unexpected softness to Kate’s almost brusque exterior and showing a very believable connection as the roles of parent and child swap over and the protected becomes the protector. I also loved the look of total acceptance as Kate is doing her mum’s hair and Mum calls her Andrew by accident, then remembers and smiles. Because it is only at that point that we are understand the earlier flashbacks in the film to a young boy, getting called out as “a girl” on the football field, and a young man helping Mum to speak again after a stroke.

Yes, Andrew is Kate and Kate is Andrew and, to many, that might be a really big thing, either positively or negatively, and pivotal to the film but, to be honest, for me it really doesn’t matter. For me the story is about the family dynamic, the tension and arguments, the return of the prodigal child, the breakdown in communications and the reconnecting after so long. These are the universal truths, typical of any family in the world, no matter what the reason behind them, and that’s what makes this such a clever little film.