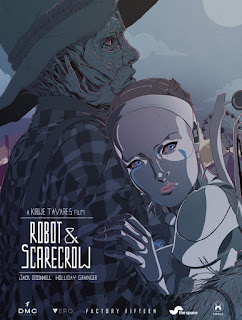 Steve Taylor-Bryant checks out an unconventional love story at this year’s London Film Festival as he watches a short film from Kibwe Tavares...

Billed as a modern day fairy tale about love Robot & Scarecrow sees Holliday Grainger’s Robot, a performance artist on the festival circuit, struggling with a dodgy battery leading to power failures and a call for her to be decommissioned. Jack O’Connell’s Scarecrow breaks his perch in a field and hitches a ride to the festival where he wants to have fun before being torn apart by a rowdy mosh pit. Having seen Scarecrow earlier in the day Robot, after being told to get off stage due to power issues, flees and evades security by stealing clothes and blending into the audience. She sees the destroyed Scarecrow on the floor and gathers up all the parts and asks someone in the craft fair section of the festival for help in rebuilding him. After he is brought back to life Robot and Scarecrow spend time together having fun and eventually seal their love with a kiss under the fireworks before the dodgy battery gets the best of Robot and she dies in Scarecrow's arms.

The first statement I have to make about Robot & Scarecrow is that the queue to have this wonderful concept get the full feature film treatment starts behind me. This was just a 15 minute short film, part of the ‘Hoping. Fearing, Dreaming’ programme, and contained little dialogue with none by the main stars. The epic scope of this story was played out in some top class visual effects and make up prosthetics and two actors who showed incredible range in what they can do with their facial expressions. It was a beautiful take on the love at first sight idea and the quirkiness of having non-human performers for the story seems to add a humanity level to it. I think in the short film concept having no dialogue was exactly the right call and it’s not often you’ll see 15 minutes of cinema this powerful, however I was left wanting more and I honestly believe that the writers, cast, and producers (which include Michael Fassbender) could give us a love story for the ages in a longer format.

I implore all of you, if you get the chance to feast your eyes on Robot & Scarecrow you will not be disappointed.