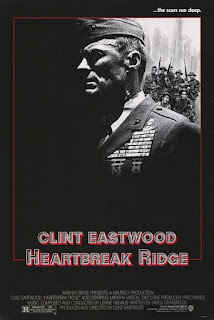 Kraig Taylor-Bryant looks at the characters of war by watching Heartbreak Ridge...

So here’s a name I happen to have heard a lot around the film industry - Clint Eastwood. I first heard the name when I watched Back to the Future and it seems to have kept popping up ever since. So this is why I chose to write about Heartbreak Ridge. After I found out that Clint Eastwood was the main character in this film, I had to know who this guy actually was and why he seemed like such a “big deal”.

I honestly do respect him for his role in this film. The portrayal of a veteran soldier who cannot seem to live his life without fighting in some kind of war is definitely an interesting one. The film follows him on his training of a battalion of recon troops that, thanks to the camp CO Major Powers, are basically to be sent out into the battlefield to be killed.

So as the film opened, I was instantly curious. The historical interest of the introduction made me feel more appreciation for those who fought for their country in previous wars, and that’s what also made me quickly respect Clint Eastwood’s character, Thomas Highway. The intro also revealed a whole new insight into how soldier entertained themselves during times of war and almost made it feel like this is the kind of people that the recon battalion became following the end of the film, as we hear at the end, Stitch Jones decided to sign up to continue fighting for his country, so we can assume that the rest of the platoon did the same.

As the introduction builds from black and white into colour in the cell block, it seems that, through simple methods of editing such as change of colour, it can almost be inferred that Thomas Highway has been in many prisons leading up to this point, but we later learn that his military record has prevented him for serving any considerable amount of time.

When Highway is in the prison we instantly know what kind of person he is when faced against someone who doesn’t like soldiers. We start to see not only that this character is violent, but he also can’t seem to stop thinking about war. Quotes such as “I think war’s just been declared,” at the times when it’s used metaphorically, are used so frequently, you have to feel sorry for the guy simply due to the fact that everything seems to be about the war within, as if his life has no other meaning. We can even see his personality through his dark tone of voice (it might just be Clint Eastwood’s natural voice, but either way it’s the perfect voice for his character) and his dark backstory of losing fellow soldiers (which we learn later on) which make us give him even more credit for how much he’s sacrificed to fight for his country.

Not too long after Highway gets let off prison, we are introduced to Stitch Jones, a singer in a bar, who also happens is going to be a soldier in Gunney Highway’s platoon, which is realised by them both after Stitch decided to get the coach to leave without Highway, and take his money. What I like most about these characters is that we’re not only shown through them, the attitude that the youth at the time had towards veteran soldiers, but we’re also shown the way that they can over time, learn to respect their superiors. It’s comical, at first to see how from the start, Stitch Jones wants to get rid of Highway, but despite all his strength, he’s too scared to do so, but as the film progresses, the relationship between a sergeant and his troops begins to “adapt,” as Highway would say.

It’s not just Stitch Jones that seems to have a lack of respect for Thomas Highway to begin with. We also notice from the start all the way through to the end, that Major Powers, Highway’s new CO, really doesn’t like him as soon as we hear him throwing words such as “relic” at Thomas Highway we instantly hear the lack of respect he has for him. We also hear such attitude towards Highway through one of the bar owners when he mentions Highway’s “bullshit heroics.” What I find most interesting that it almost seems like it’s only those that had actually fought in the war, or were affected by it, that actually respected Highway as all the rest either saw him for his time in prison for getting drunk, or simply didn’t care about becoming an effective soldier.

We do begin to learn that some members of this platoon do look out for their own, however, as when we keep hearing Stitch and the rest of the platoon making excuses for one of their fellow soldiers who has to take a second job to pay for his family. It’s around this point that Highway starts to earn their respect too, through his generosity when he gives them some money to help the soldier’s family out. 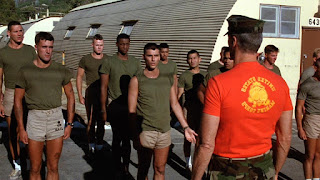 What I find the most interesting, is the difference in the quotes between Major Powers, Stitch and Highway. The fact that Stitch Jones tells Highway that they’re “not supposed to win” makes you realise how little Major Powers cares for his troops and makes you wonder if someone who doesn’t care about their troops should be leading them into battle. The fact that Highway responds to this by saying that he “doesn’t give a f*ck about Major Powers’, shows us that Highway is willing to disobey a direct order if t means doing the right thing. It’s as if this film is trying to send across a clear message that sometimes experience outranks everything and experience is something, which we learn early on in the film, that Powers has a lack of. What’s most interesting about Powers is the fact that when his superior asks Powers if his men are ready, he responds that his men are willing to fight to the death to protect their country. This almost implies that he is expecting his soldiers to die and is not willing to “adapt” to prevent this from happening.

We continue to see the recon platoons gain respect for Highway through Highway acting as a part of the same “team” as them when they are in a training exercise. In one exercise they finish at the same time as Powers’ platoon and in order to settle who won, Highway and Powers have a game of “match ups” and the fact that their platoons did the same and they still couldn’t decide, leads them to fight each other and when Recon platoon win through Highways troops, and then followed by Highway, shows their respect for each other grow through their victory and celebration bringing them closer together.

Now to what I believe, is the most important quote of the film as it acts as a symbol of respect and authority throughout the film in many scenes. This is when Highway says that a soldier must “improvise, adapt and overcome.” The fact that this is shown so frequently throughout the film, is what makes this quote one of the most important quotes in the film. We first see this through simply the fact that Highway expects his troops to wear the same t-shirt as him every day, without him telling them what that is, and how Stitch finds out a way to discover what Highway is going to wear the following day not only shows that he can “adapt and overcome” but it is also a sign that Stitch Jones is learning from what Highway is teaching and another sign of him gaining respect for Highway as he’s learning to trust/listen to him. We even see this when they are out on the battlefield. The fact that when they are fighting they use a tractor as cover to push forwards shows that they are “adapting” to the environment and when they find a way to get a signal to call for an air strike when they are trapped, they improvise and find another way of calling the air force.

This leads them to charge the hill in the final act and win the battle. The fact that through adapting, they won this battle is what makes this film a great inspiration to anyone that they can adapt to any situation and succeed as well as convincing the audience to gain a bit more respect for the veteran soldiers as we see, through certain characters in this film, that they do not always get the respect they deserve. So now that I better understand who Clint Eastwood is, a respected actor/director known for his role in historical films, and I now respect him as a person, as he clearly respects those who fought in the war.