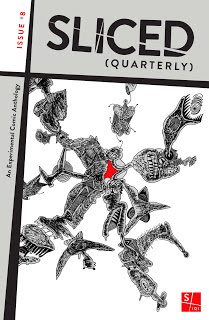 Steve Taylor-Bryant delves into another indie comic anthology release as he takes on the latest issue of Sliced (Quarterly)...

So, here we are. The back end of 2017 and Sliced (Quarterly): An Experimental Comic Anthology is still going. I am not surprised, I started this year reviewing the book put together by Ken Reynolds and marvelled at the contributions, so when Ken writes in the introduction to this issue “It’s a niche book inside a niche interest” I firmly believe he is doing himself and his talented pool of creators a disservice. Niche is one of those words that to the general public pretty much means ’inaccessible’ or ‘not for them’ and I think that there is a larger audience out there in reader land that are deserving of the work you find contained within these pages. It is experimental in that you won’t find ‘Big Two’ type stories in it. It’s not an X-Men or Superman title. It’s a collection of important, or funny little stories that showcase some great writers and artists and I still hate the fact that indie creators have to market themselves as experimental, I honestly wish these guys were the norm. Anyway, enough rambling what’s in issue #8 I hear you cry?

Well, after a cover by Daniel Ableev and Ken’s introduction we come across Blood, Sweat, & Balls Written by Pablo Iten, illustrated by Aimee de Jongh, and lettered by Frits Jonker. This is a brilliant take on conventional comic rules by having comic characters think they are in a comic and realise that they must use violence, expletives, and nudity to entertain the reader. This is done remarkably well and not in the way that you may expect. An incredibly strong start to this latest collection.

Blunt follows, written by Tom Abbosh and drawn by Chris Dean which is about a struggling supermarket salesman and is reminiscent of the cartoon strips I read as child in my parents' Sunday paper. Nice, without doing much.

Next up is Prayers to Dakshayani by Steve Tanner, with art by Alex Thompson and lettering by Ken Reynolds which is a beautifully drawn and coloured slice of history. I knew very little about the Sati Ritual so this particular section of the issue is as informative and educational as it is stunning to look at.

Two strange ones for next. First up was The Passenger by Tim West which appealed to me immensely in its content about the paranoia we can all give ourselves in our struggles with mental health, but I didn’t like the art one bit, completely my issue I am sure. It was then followed up by ASMR written and drawn by David Thomas with lettering by Ken Reynolds which I am not sure how I feel about. My first reaction was along the lines of ‘wtf’ but the more I looked at it the more I realised I don’t think I got it, understood what’s on the page. I can’t say I like or dislike it, I just don’t comprehend it is all. That’s not a criticism by the way, it’s nice to have a book that contains something that challenges me in some way, especially in a way that means there is a gap in my education or understanding that I possibly need to work on.

Dave Everyman is next up and I’ll be honest right from the get go; I am a sucker for Jim Lavery’s art. I honestly hold him up there alongside Martin Simmonds, Mike Dowling, and Jamie Hewlett in my arty affections so I think I was destined to like this story anyway. Dave Everyman tells the story of a bloke who goes through life lamenting the fact nothing he says or does is noticed by anyone whilst being completely oblivious to the woeful acts of murder and crime that are going on around him. Written wonderfully by Jay Martin and with Ken Reynolds letters and Aljosa Tomic’s colours to complement Lavery’s extraordinary pencils and inks, Dave Everyman blows me away.

How do you follow something as good as that? You read Oh, Dad! By Tom Abbosh and drawn by Chris Dean which is some funny, twisted brilliance. Then we come to Red Temple written by Scott Melrose with art by Dave Snell and letters again by Ken Reynolds which is really clever and perfectly shows the effects of institutionalisation. It’s a brilliant story that plays out with some incredible art and colouring detail. The Fate Department from Adam Flap and Ken Reynolds is next and the payoff at the end of the strip his laugh out loud funny. You won’t forgive yourself if you miss out. Farquhar Part 2 rounds off another brilliant collection and Tara Lucy use of pencil in this story is so refreshing. To see something so simple done so well is marvellous thing to see.

As always in his collections Ken ends the book by highlighting the work of someone else in his Small Press Preview and this time it’s some art and a brief review of the book Brain Shoodles from Emily B. Owens that deals with anxiety and depression in a great way. The inclusion of helplines is a nice thing to do and I am left wanting to know more about the book and the artist so bravo Ken, Small Press Preview is a wonderful thing to do.

All in all I would say Issue #8 is a marvellous success. There was some stunning art, brilliantly written stories, some educational moments, and most of all I didn’t get everything. I said earlier it’s important for the work to challenge the reader otherwise what are we all in this for? If I liked everything I'd be upset, I’d be far too easily pleased and we would live in a boring world indeed. We need more books and collections that give no shits, more books that try and stand apart from the conventional is a flooded market. We need more books like Sliced (Quarterly) Issue #8.

Sliced Quarterly #8 is now available to read and download for free at www.slicedquarterly.co.uk All the previous issues and specials are there to be enjoyed too!
Email ThisBlogThis!Share to TwitterShare to Facebook