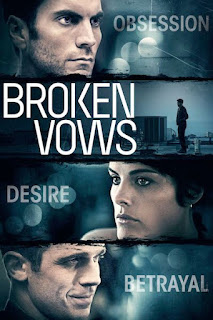 With Blindspot back on TV tonight, a chance to see Jaimie Alexander in a different kind of role as Broken Vows is available to watch at home now thanks to Lionsgate...

On her bachelorette-party weekend with friends in New Orleans, Tara (Jaimie Alexander - Blindspot) falls for the darkly-sexy bartender Patrick (Wes Bentley - American Horror Story). Waking in his bed the next morning, Tara instantly regrets her unfaithfulness and flies back home to her fiancé (Cam Gigandet - Twilight). Her secret flame becomes a full-on fire when Patrick shows up at her house, surreptitiously tries to cancel her wedding arrangements and stalks her every move. He spirals into madness and delusion, determined to have Tara no matter what the cost. When his efforts fail, he tracks the newlyweds on their honeymoon where he erupts in a psychotic, murderous rage. Tara will have to find the strength she never knew she possessed to stop Patrick from destroying her marriage and her life.


Directed by Bram Coppens from a screenplay by Rage writers Sean Keller and Jim Agnew, Broken Vows is available to watch now on Digital Download