Project RPO - LotR The Return of the King 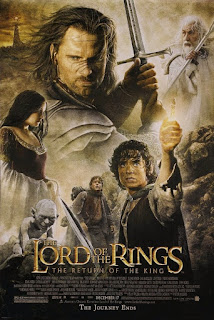 Our small band of Gunters here in The DreamCage universe are reviewing every film mentioned in Ernest Cline's Ready Player One. This week, Daniel White returns to The Lord of the Rings with The Return of the King ...

I had to watch this one again to remember how annoying the ending was. You see, I have a big problem with this film as I totally lose interest once the ring is all burnt up. It's not that I am unsentimental and I do get that the film needs an ending but it really didn't need three now did it? So, if you remember, when we left Middle Earth, Frodo and Sam were being led into a trap by Gollum and the trees had revolted against Saruman and had flooded Isengaard and drowned all the orcs. Sam suspects Gollum is up to something but Frodo is being possessed by the ring and doesn't see as clearly as once he did. We also get a clever little origins of Gollum story before things really kick off, which is nice. By this time, and especially if you are on a Lord of the Rings extended watch, things are getting a little tired. I think that is the main issue with Return of the King in that it feels like it is the weaker of the trilogy but, in reality, its more than likely just ring fatigue.

The shifting of the action focus is still effective, with the journey to Mordor being counter balanced with Aragorn and Gandalf's preparations for war.  I really enjoy the Steward of Gondor's scenes as he desperately attempts to hold onto a throne which he is not entitled to. Aragorn and Legolas continue to swash and buckle as they always do and the CGI support that renders the ghost legions is dramatic and exciting. I've always felt that the final part of a trilogy should be more than a tying of loose ends and there is also scope for character development. We all know that the ring gets thrown into the fires of Mount Doom and we all know that Sauron is defeated so there are no surprises to dazzle audiences with. Jackson has always focused on delivering a cinematic Lord of the Rings that befits its fan base and, to that end, he achieves everything that is demanded of him. All the elements of Tolkien's books are present and as the Witch King falls to the sword of Eowyn we mourn the loss of King Theoden. There are moments where I can't help laughing and it's probably not the reaction Jackson was attempting to elicit.

All the way through the trilogy Elijah Woods has delivered an astonishing performance, as haunted and committed Frodo, but this face! Kind of a weird combination of constipation and rabies is not effective. I am not sure what the correct facial expression should be when stabbed by a mutant spiders poisonous barb but this isn't what I would have gone for. Additional amusement can be found when you realise that the music that accompanies the lighting of the beacons sounds hugely like the Sky News theme. Once you hear it you can't ever watch the scenes again without imagining Kay Burley reporting on location. As Sauron is distracted by Aragorn and company mouthing off, Frodo finally makes it to the fires and the ring is burnt to liquid metal. Once the overly large bird things have rescued Frodo and Sam from being reduced to ash, things start to calm down a bit. Incidentally, if the big birdies can fly to Mordor and rescue the pair of them couldn't they have been persuaded to fly there in the first place. Admittedly, it would have reduced the running time of the films considerably but then Sean Bean wouldn't have died (allegedly a contractual obligation for everything he appears in).

This is where we get three film endings and they are as follows:

Everyone is dressed up and the whole kingdom has turned up to here Vigo sing something in Elvish and to snog Liv Tyler. AWWWWWWWWW! Slow dissolve as the music swells and everyone smiles except......

2) Back in The Shire (Sam Gets The Girl)

Sam and Frodo are enjoying some Hobbit ale and Gamgee finally grows a backbone and asks Serving Wench to marry him. Frodo finishes the book that Bilbo started writing centuries ago and also adds his own story. Sam and aforementioned Serving Wench have children and are all smiley living happily ever after. Cue slow dissolve as the camera pans for a wide shot of The Shire except....

3) Frodo is too damaged after his experience with being the ring bearer and Bilbo is now really really old and wrinkly. Gandalf is pretty knackered as well (insert joke about can't get the staff) and it's final call for all Elves to travel to lands over the seas or something. Frodo doesn't tell his closest friends he is leaving as well as he figures they would love the surprise and just kinda runs off to the boat. Gandalf and Bilbo board as well and finally the film ends.

By this stage I have lost the will to live and my bottom is so numb I resemble a member of the walking dead as I attempt to leave the cinema. Its just too long and it feels like Jackson wanted to stop but has spent more than a decade of his life in Middle Earth he doesn't want to leave either. LET IT GO Man!

Much later on - Television Studio in talks for a Lord of the Rings series. NO NO NOOOOOO NOT MORE NOOOOOOO!