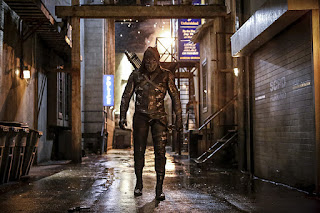 With spoiler warnings for those that aren't caught up, Kraig Taylor-Bryant gets caught up with the story in Arrow Season 5...

Everyone who watches TV has seen at some point, a TV show/series that has gone on for too long, whether they think it’s the Big Bang Theory, Marvel’s Agents of Shield or possibly Iron Fist. Arrow season 5, however, manages to keep things fresh and bring something new to the table that none of the other seasons of this show were able to do, the darkness in “Team Arrow”.

So from the beginning we are introduced to a pretty dark character, Tobias Church (Ched L Coleman), a man who believes himself to be in charge and, in order to take over Star City, he believes that he must take down the Green Arrow. The fact that this villain in itself is a little challenging to take down makes the series interesting and makes you believe that he is the villain of the series. When Oliver Queen (Stephen Amell) realises that he needs to assemble a new team, we have Curtis (Echo Kellum) get beaten up for no reason, leading him to join the team. Meanwhile, Diggle (David Ramsey), who has now enlisted back into the U.S army, has been imprisoned by a corrupt superior in order for them to retrieve a nuclear weapon that they can sell and make a fortune. It’s at this point that I really bought into this season, as Oliver breaks into a prison in order to save Diggle and even beats up his own team in order to do so as they stand in his way. Diggle is released and things seem a little better but a little odd at the same time.

One of the things that I also liked fairly early on in the season was the fact that Prometheus, the newly revealed Antagonist that killed Tobias Church after he was captured for failing to catch the Green Arrow, got the identity of the Green Arrow and made Oliver kill Felicity’s latest boyfriend after thinking that it was Prometheus when it was in fact Prometheus himself that set up this act in order to commence the suffering that he would continue to inflict.

As the season progresses, Oliver ventures out in order to find one of Ra’s al Ghul’s daughters, Talia (Lexa Doig), after figuring out Prometheus’ fighting style and recognising its similarity to his own. Oliver finds out that Talia did train him in the hopes that he would kill Oliver in order to avenge her father’s death whilst also revealing the identity of Prometheus as Adrian Chase (Jason Sagarra), Oliver’s D.A when he was Mayor. What I like about this moment is that Adrian is prepared for Oliver’s return as he has already taken Oliver’s girlfriend and is holding her in an unknown location. It’s almost as if from this point onwards, Adrian is always winning, even when he loses.

Even when Oliver frees his girlfriend from Chase, he still gets captured himself due to the assistance of Talia. Oliver is then tortured into confessing a truth that no one else really knew about himself throughout the show, that he enjoyed killing. This is what is significant about this villain in particular, it’s not that he has superior fighting skills to Oliver, it is simply the fact that he is so many steps ahead of Oliver that he can plan for what Oliver is going to do and find numerous ways to torture him into admitting that he enjoys killing.

After this, Oliver decides to hire a Russian mob to assassinate Adrian Chase in exchange for drugs for diabetics, by which point we really see what kind of person Adrian has turned Oliver into. Even this doesn’t end up working after the rest of Oliver’s team interfere and stop the mob from finishing the job. 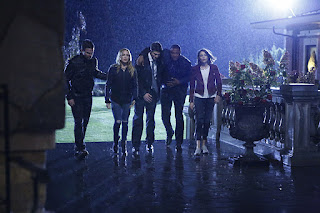 You would think it would end there, but it doesn’t. When Oliver has finally been convinced that the city needs the Green Arrow, he captures Adrian but, even when he does, Adrian has already captured Oliver’s son William, and in order for Oliver to see him again, he must free Adrian. The rest of Oliver’s team had also been captured by the rest of Chase’s allies and they are then held on the island where it all began, Lian Yu. The fact that this season links back to the first season is incredible, not only this but it also links back to the second season after Oliver frees Slade Wilson in order to help save Oliver’s friends, Thea, and Oliver’s son. Even when Oliver achieves this, he still loses, as after this event, Adrian chooses to kill himself in order to destroy the island and attempt to kill the rest of Oliver’s friends still stranded there. So this not only ends with the question of who survived, but also with the question of if Oliver truly won this time.

Let’s look a little more in depth about the events of this season. It not only links back to previous seasons perfectly, with the appearances of Malcolm Merlin and Slade Wilson, but is also perfect at conveying the darkness within all the main characters. When Team Arrow are trying to stop the corrupt general from selling a nuclear bomb, Felicity blackmails a casino owner of the safety of his family’s life in order to get some vital info, and Diggle even tortures a man to find out where the deal is going on. This is perfect in representing not only the darkness within all of those that wish to fight crime, and having to face the choice of fighting fire with fire, but it also raises the question of if Prometheus/Adrian Chase is right about Oliver negatively effecting those around him. If Oliver hadn’t invited them to join him in the first place on his crusade they would have never been influenced by Oliver’s actions in order to get the job done.

I also really liked the fact that one of the members of Oliver’s team (Evelyn Sharp played by Madison McLaughlin) was a spy for Adrian and, when he again tries to make Oliver kill her in order to escape, he makes Oliver think that he broke her neck in order to make him lose hope and admit the truth. He also did this in order to get Oliver to kill for no reason as, of course, we later found out that he was bluffing in killing Evelyn. We even see Adrian hand Oliver a knife after he chooses to release Oliver and is still convinced that Oliver will kill him.

Another thing that’s different about Adrian Chase/Prometheus as a villain is the fact that he is so consumed with getting vengeance for Oliver killing his father that he is willing to do anything to continue to have the upper hand, even kill his own wife when she is held hostage by Oliver. This again differentiates him from the other villains of the show, as they still care for their loved ones and, as we see repeatedly with Malcolm Merlin, will do anything to protect them.

As mentioned before, the Slade Wilson appearance towards the end of the season was incredible. The fact that Slade is once again Oliver’s ally and it’s almost like old times, when they were stranded on the island and he, Oliver and Shadow were living together whilst also trying to find a way off of the island. It’s as if this season was a tribute to old characters whilst combining them with the new, especially with the appearance of Earth-2 Laurel (who I personally felt was a little overused, but, oh well).

To sum up though I thought this season was amazing and it’s definitely either as good as Season 2 (which was my favourite up until this point) or even better as, in many ways, it helps us to appreciate the seasons that came before whilst also keeping us hooked by giving us a villain that is generally unpredictable and impossible to beat in many ways. It wasn't to do with who can fight better, this time the villain was completely original and, if they were to use some version of that aspect of psychological torment in seasons to come, they would quickly become favourites of mine too, as long is it wasn’t overused.