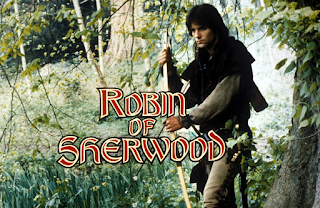 Today sees the long-awaited return of Michael Praed to the role of Robin Hood in ‘Robin of Sherwood: Sanctuary,’ a Christmas special audio story from Spiteful Puppet...

After two series of the classic 1980’s television series, Michael Praed left the title role to head for Broadway in America. Instead of ending the series, writer/creator Richard Carpenter drew on the stories of old and re-cast the role. Whereas Michael Praed’s Robin was a working class revolutionary, the incoming Jason Connery as a new Robin – chosen, after the death of the original Robin at the hands of the Sheriff of Nottingham, by the mystical guru figure of Herne the Hunter - was a titled gentry figure who was keen to fight for what was right; even if that meant relinquishing his title and donning the outlaw’s hood.

Last year, Jason Connery returned to the role in the full-cast audio adventure ‘The Knights of the Apocalypse’ (read VentSpleen's review here) and, with a new box-set of four full-cast adventures on their way in 2018, Michael Praed had agreed to return to the role as well.

However, Creative Director and Producer/Director Barnaby Eaton-Jones didn’t want fans to wait that long. So, he commissioned a ‘Christmas Special’ for the enhanced audios series range that has just been released by ITV and Spiteful Puppet. 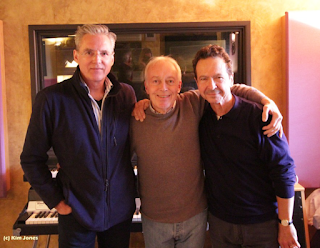 Now Michael Praed returns (alongside Nickolas Grace’s Sheriff, Andy Secombe’s Priest and Daniel Abineri’s Herne – the latter taking over the role that his late father John Abineri played in the original series) in an audio adventure called ‘Sanctuary’, set against at snow-covered backdrop of Sherwood Forest during the festive season…

“Two enemies find themselves trapped together in an abandoned church on the far edge of Sherwood. Robin of Loxley and the Sheriff of Nottingham are both wounded, and without weapons, in the care of a hedge-priest.

The ancient law of sanctuary means that no blood can be shed but emotions are running feverishly high.

As the snow continues to fall, and with no apparent means of escape, new dangers begin to emerge. It becomes increasingly difficult to tell friend from foe…”

Nickolas Grace, the Sheriff of Nottingham, was "thrilled that Michael Praed is returning to the role of Robin Hood after a mere 33 years!" adding "He was one of the three reasons I accepted the original Goldcrest offer in 1983: 1) I’d always wanted to play The Sheriff of Nottingham; 2) I loved Kip Carpenter’s writing for Catweazle and wanted to speak his lines as The Sheriff; & 3) I’d seen Michael’s charismatic Frederick in Pirates of Penzance at Theatre Royal, Drury Lane, thought he’d be a perfect Robin, and that it would be exciting to play his antagonist in a new TV Series. I made the right decision!"

Barnaby Eaton-Jones, who adds Narrator to his wealth of skills on this story, said “It was a cheeky delight to step in and narrate this particular story. But, I have to admit, I wasn’t first choice! As the Producer and Director as well, I did ask several original cast members of the show but, sadly, schedules and work commitments clashed and – as the recording session drew near – I had to step in and try to match the talents around me. As those talents were in the form of Michael Praed, Nickolas Grace, Andy Secombe and Daniel Abineri (who are all well-known and well-skilled at recording audio), my nerves were doing a festive dance. Fortunately, the words of the script by Paul Birch were so beautifully written that it made it a very easy task indeed. All of the above mentioned, coupled with the amazing and immersive sound design by Joseph Fox and the Clannad-esque soundtrack by Alexander White of Arpeggio Creative, make this – for me – a very special audio to have worked on.”

Television series Robin Of Sherwood © HTV/Goldcrest Films & Television 1983. Created by Richard Carpenter, with grateful thanks to his Estate.
Email ThisBlogThis!Share to TwitterShare to Facebook