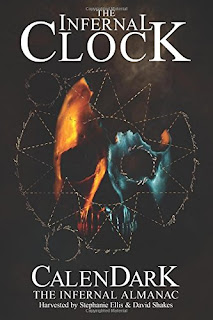 Way back in April I was introduced to The Infernal Clock, a collection of 24 stories with a devilish connection, one for every hour of a full day, midnight to midnight. Well, time and tide wait for no man and the collective brains behind that collection are back with a new book, CalenDark, The Infernal Almanac.

As the name suggests we are no longer looking at the hours in a day but 16 short stories spread over the whole year... hang on, sixteen? It turns out we’re not following the Gregorian calendar here, so it’s not one story a month as I had expected. Instead festival days are celebrated in this almanac and there are recognisable dates like Twelfth Night, Valentine’s Day and Hallowe’en among older, more traditional days like Beltane and Lammas and even a few that I hadn’t come across before like The Blessing of the Throats (the day after Candlemas, where St Blaise is called upon to heal the sick) and Punky Night (a traditional October celebration of Jack o Lanterns peculiar to the West Country) so there was a wealth of source material for the writers to choose from as well as a lot for readers to learn, and that’s before we even get to the stories themselves.

And, as with Infernal Clock, there is a real variety to the stories in the collection although this time they’re all, pretty much, grounded in the present and a recognisable reality, there are no flights of fancy here, at least, not to begin with. One exception to this is the sublime story The Wind of the Hurricane written by Mark A King which really caught my imagination, firstly by being so different to the others and having an observational, almost otherworldly, feel to it, without that grounding in a present reality, and, secondly, by being written in a future tense so that it always felt like it was predicting what will happen which made my inner language geek very happy indeed. Every story in the collection though takes a darker turn. Sometimes that darkness is supernatural and, sometimes, it is very, very real indeed. I made the judgement call of reading one story a night at bedtime over the past fortnight or so and I will admit there were nights I didn’t get to sleep so easily afterwards but I count that as a good thing for a collection of horror stories.

Other favourites? For me, as well as King’s story, I really enjoyed the nightmarish revenge factor of Lord of Misrule by Christine Dalcher and the completely unexpected twist in The Green Man’s Fete by Clive Tern. But that’s not to say the rest aren’t excellent stories, as David Shakes and Stephanie Ellis have “harvested” (as they put it – I love the nod to the traditional farmer’s almanac!) another collection of stunning work from authors, some of whom you may recognise from The Infernal Clock, others who will be as new to you as they were to me. Whatever your taste in horror writing though, from supernatural and psychological to pure visceral gore, there is something for everyone in CalenDark.

Before I finish, I must also mention the beautiful cover art by Tim Youster, it’s so striking! Between the colouring of the skull to the diagrammatic use of lines and the incredibly clever hiding in plain sight of all the contributors’ names, it reminds me so much of something from the pages of Leonardo’s codex notebook and I couldn’t think of a more perfect cover for an almanac.

One question, however, still remains. Having done a day and a year, what’s the next timeframe to come under the Infernal Eye? Tick, tock guys, I'm waiting...