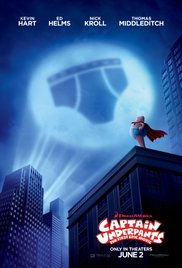 Is it a bird? Is it a plane? No it's our own superhero Kraig Taylor-Bryant taking on Captain Underpants: The First Epic Movie...

Why am I writing an article on a Universal film based on a children’s novel about a grown man that actually flies (kind of) around in his underwear? Well, it all started some time 7-ish years ago when I went to Cribbs Causeway Bristol and I found a book in Asda/Walmart titled “Captain Underpants and the Preposterous Plight of the Purple Potty People.” Intrigued, a younger me decided to pick the book up and have a read and, strangely enough, I found myself fondly interested in the whole book series from then on throughout my childhood. Of course now I have lost track of what books came out as I feel as if I have outgrown them, but what sparked my interest above all these new books was the DVD release of the original book made-film titled “Captain Underpants: The First Epic Movie”. The moment I saw what my younger brother was watching recently I was instantly enveloped again in that world that I was once so intrigued in many years ago.

So what did I think of the film? It was interesting, to say the least. I understand that this film was made to pique the interest of kids more than any other audience, as I suppose this was Dav Pilkey’s (the books' author) way of reintroducing the franchise to a new generation of kids, which I think is a terrific idea and, in fact, it’s now got my younger brother as interested in the franchise as I was.

Here’s a general synopsis of the film in case you are unfamiliar with the character: Two overly imaginative pranksters named George and Harold hypnotize their principal into thinking he's a ridiculously enthusiastic, incredibly dim-witted superhero named Captain Underpants. It’s a ridiculous concept I know, and that’s why I loved it growing up.

Let’s start with the positives of the film, the voice actors of the kids who are thrown into this new world, after making the horrible mistake of turning their principal into a fictional superhero they created through their home-made comic books. George and Harold are played by Kevin Hart (who I feel was perfect for the role) and Thomas Middleditch, whom I seem to recognise the voice of from other things, but could never quite put my finger on it (until I googled it and, to my surprise, he voices characters from my favourite video game of all time, Star Wars the Old Republic).

This film in general kind of introduces us to the title character, if the audience were already unfamiliar, by having Captain Underpants/Principal Krupps get into all kinds of mischief, purely because George and Harold don’t want to be separated into separate classes as punishment for their mischievous actions being caught on tape. I for one thought this was an incredibly clever idea because it allows the audience to perfectly understand the differences between Mr Krupp and Captain Underpants and how they switch between the two. It also establishes how dangerous it is for Captain Underpants to be around as that’s not completely elaborated on in the books. So in this sense the film is better than the book but, of course, this can’t be the case with all aspects of any film compared to the book, which I will get to later.

Anyways so the second half of the film is based on the new teacher at the school who seems to have a hatred of people laughing at his name, which of course is understandable, and the fact that he hides it to begin with by simply calling himself “Professor P” (his last name being Professor Poopypants.) It’s at this point that I almost feel sorry for the guy, of course he’s animated but I imagined them as a child as real characters and I nearly see them as characters now who still have their own personalities who have been developed enough for me to care about them from my childhood. And I think it’s hard to not feel sorry for a character who gets laughed at wherever he goes; to be perfectly honest, if I were in his shoes, I would probably have turned into an evil genius with the intent of removing the ability to laugh from all children, maybe not remove happiness entirely, but who knows, I don’t have that name. 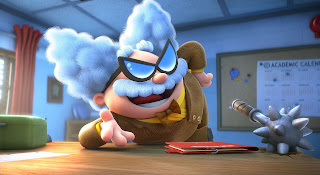 Talking of laughing, let’s look at the comedy used in the film, a lot of which was definitely not used in the book. Now of course I’m not saying that this is a bad thing that they implemented new forms of comedy in the film, in fact there are several moments in which I laughed a few times. In the books themselves I think the laughter was implied in the ridiculousness of events, such as when, in one of the books, a boy tries to combines his body with a robotic one to make himself strong, and he ended up combining his DNA with himself, the robot and his snot from when he sneezed during the process. That, in itself, is ridiculous and, as a child, I found this hilarious, so the fact that they have added a new element of humour to the film is almost perfect as it’s as if they are trying to make the comedy to stay with those who have grown up with the book whilst also having the humour funny for younger children who had never even previously heard of Captain Underpants. A case in point; in one scene, George and Harold trick one of the teachers to thinking that they are on the phone to someone who will give them a chance to win a lot of money if they remain on hold and they do so for the remainder of the film! It’s these things that I think that some people older than me may even find this funny if they commonly have the same issue.

Of course I have to point out the faults, because, well, that’s what I’m best at, I don’t like to admit it but it’s something I’ve come to accept in my previous rant articles. The film doesn’t exactly follow or stay true to the books in the sense that it tries to tie too many stories together at the same time, such as Professor Poopypants working with Melvin the school tattletale (who becomes the villain in later books as the Bionic Booger Boy) and using a machine that looks exactly like the giant toilet that tries to take over the school in one of the other books. I understand that they are trying to make the books as fun and interesting as possible, but there are other ways of doing this. I also feel as if they were doing this to make it seem like a different story to those who already know it whilst still being an origin story for those who don’t know the story.

But I honestly feel as if they could have just invented a new villain for this purpose, but ah well, it’s not a major inconvenience [unlike the giant toilet which IS a major convenience. Sorry – Ed]. There’s also the fact that their mean old principal Mr Krupp finds a girlfriend at the end of the film, it almost seems as if it would be a good ending to the story of Captain Underpants if they were to only make one film, which I really hope isn’t the case. And as I recall, Mr Krupp never really did change in the books, but of course, the films are meant to be a little more child friendly.

But these are minor problems with the film, as the good far outweighs the bad in this interesting tale. The music in the film, I think, was incredible as the moment where George and Harold beat Professor Poopypants with their immaturity is just perfect. I just wish that Captain Underpants actually contributed a little more to the plot towards the end as he should at least seem like some kind of beneficial hero but, if this happened, it would not have led George and Harold to destroy the ring that hypnotised Mr Krupp in the first place, and therefore may not have given it as good of a closing to the story. But again, the music was incredible and it really brought out the atmosphere of the character’s feelings and helped to bring these animated/fictional characters to life.

This is a film that I would really recommend to anyone who was either a big fan of the books growing up or simply wants a good film to watch with their kid on a Friday night. In many ways this film does Dav Pilkey proud and, embarrassingly, I do hope that they will make a sequel.