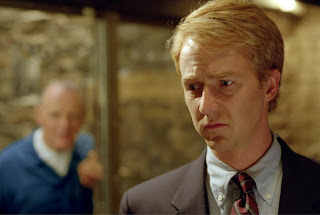 Let's be honest, I can't have been the only person nervous when Red Dragon was announced. I understood the need for the Hannibal Lecter trilogy to be complete with Anthony Hopkins in his now iconic role, but Manhunter had been such an incredible film that a remake, even with Hopkins, was risky. Hannibal itself wasn’t the greatest film of all time, with all sorts of casting issues, but the studio pushed ahead to complete the trilogy and so, at the end, we had the first film. And it was okay. It was better than Hannibal, although that wasn’t a hard task as Hannibal was awful in many ways,and at least a piece of recasting in Red Dragon was more successful than the changing of Clarice Starling had been.

The film starts with FBI Agent Will Graham (Edward Norton) on the search for the Chesepeake Ripper, using renowned psychologist Dr. Hannibal Lecter as a guide into the mind of a cannibal, until he clicks that Lecter is the evil doer and a fight nearly ends in tragedy for both men. Three years later a recuperated Graham is in Florida, repairing boats and living with his wife and son, and Lecter (Anthony Hopkins) is encased in his cell within the Baltimore State Hospital for the Criminally Insane under the watchful gaze of Dr. Chilton (Anthony Heald). Another strange serial killer is at large though, dubbed ‘The Tooth Fairy’ by journalist Freddy Lounds (Philip Seymour Hoffman), and Graham’s old boss Jack Crawford (Harvey Keitel) enlists Graham to help as they are making no headway in the man hunt. Graham comes back and notices the odd thing other investigators have not, but still feels in needs more insight and decides to visit with Lecter to ask for help and so begins another shot at the relationship. Eventually ‘The Tooth Fairy’ is revealed to be Francis Dolarhyde (Ralph Fiennes) and in a final conflict at Graham’s house Will manages to use Dolarhyde’s own psychological issues against him to save his family.

Firstly, let's get through the issues I have with Red Dragon. They aren’t huge and I really enjoyed the film, but the issues do stand out. Ralph Fiennes makes a fantastic mentally deranged psychopath, he really does, and I’d watch him play bad guys all day long, but he wasn’t a patch on Tom Noonan’s version from Manhunter. I also didn’t enjoy Keitel as Crawford but those damn insurance adverts seemed to have ruined Keitel for me. I also felt the film was lacking something in Brett Ratner’s direction. In Lambs, Jonathan Demme made the most of Hopkins performance by having Lecter spew his thoughts and insults straight down the camera lens so you felt Lecter looking into your soul but in Red Dragon, whilst Hopkins is of course great still, the edgy feeling I used to have watching Lambs is not as powerful and as a member of the audience that’s quite a shame. And finally the soundtrack. It's too loud and it's too intrusive. There are scenes, especially when either Lecter or Dolarhyde are being evil, where you don’t need music to heighten the viewing experience, and if you did need music perhaps something more subtle. It just seemed to be trying too hard.

There is some huge positives from the film though, and most of these belong to Norton. I’m aware that he took the film more for a payday to finance other projects than he did for the love, but still he was brilliant and he played well off the others, Hopkins and Hoffman particulary. Red Dragon is a good climax/start to the Hopkins Lecter films and rightly has its place. It is well written and for the most part well performed by a cast that seemed more in tune with each other than they do in Hannibal. It just lacks some tidiness, some professionalism, and some camera cues from Lambs.