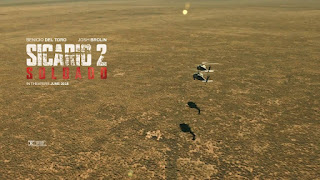 "No rules this time." Watch the trailer for Sicario 2: Soldado...

The drug war on the US – Mexico border has escalated as the cartels have begun trafficking terrorists across the US border. To fight the war, federal agent Matt Graver (Josh Brolin) reteams with the mercurial Alejandro (Benicio Del Toro).

With a screenplay by the original Sicario's screenwriter Taylor Sheridan, the film is directed by Stefano Sollima (Suburra, Gomorrah) and is due to hit cinema screens in June next year.