Film - When the Wind Blows 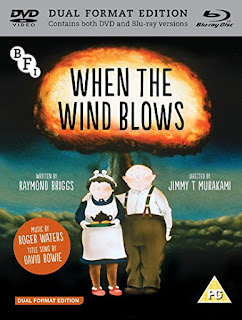 Looking for something cheerful to watch in the dark days of January? The BFI mark the release When the Wind Blows on dual format Blu-ray/DVD with a special screening and Q & A...

When the Wind Blows is a story about love, tenderness, humanity and hope in the face of nuclear war. Adapted by Raymond Briggs (The Snowman, Ethel and Ernest) from his bestselling graphic novel, it features an original soundtrack by Roger Waters (Pink Floyd) and title song by David Bowie. It will be released on Blu-ray/DVD by the BFI in a Dual Format Edition on 22nd January 2018, packed with special features including interviews, a documentary on the director and the public information film Protect and Survive (1975).

Jim and Hilda Bloggs (voiced by Sir John Mills and Dame Peggy Ashcroft) are a middle-aged couple who put their faith in the government as they prepare for nuclear war. When the countdown begins, they roll up their sleeves and follow the advice contained in the real-life official booklet of the time, Protect and Survive. They whitewash their windows white, build a shelter out of doors and pillows, take the washing in and put away packets of ginger nuts, a tin of pineapple chunks and a good supply of tea.

This legendary, cautionary tale is both humorous and macabre in its consideration of one of the most horrific possibilities of modern life.

This new release will be celebrated with a special screening at BFI Southbank (NFT3) on Sunday 28 January at 3.20pm, followed by an on stage Q&A with executive producer Iain Harvey. It is a part of the BFI’s year-long celebration of the craft and creativity of animation in 2018.

Here's a reminder of the original film trailer from 1986