Memorabilia - Not Up For The Cup 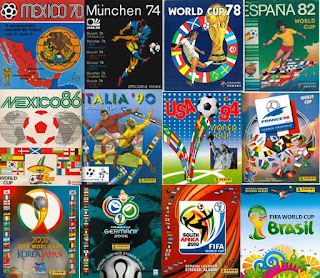 Marc Nash takes a trip down memory lane as his remembers football stickers and generally disappointing matches at World Cups gone by, just in time for the 2018 draw...

I was born in 1964. I had gained consciousness of a sort by 1970. Like most boys of that period it was largely through football. At age 6 I plumped for my parochial team and have maintained a relationship with them that exceeds in duration any other I have had in my life. This team were not local to me, did not even come from London where I was born and resided. Somewhere in there was the first step however unarticulated, on my road to self-assertion and independence; I eschewed supporting my father's team. No father and son bonding on the same terraces for us as I precociously supported Oedipus Disunited.

In the early 70's, there were barely any games televised live from kick off to final whistle. The FA Cup final and the Home Internationals was about the sum of it. Oh and every four years of course, the World Cup brought to us in grainy pictures as befitted countries with inferior technology, as our parochial commentators never tired of telling us. In 1970 it was Mexico, where we learned about the concept of playing in the thinner air at altitude. The exotic nature of such events were buttressed by things like the sticker albums. I collected the F.K.S World Cup Soccer Stars 1970 and was confronted with Romania's wonderful large V-necks, Peru's single thick diagonal red stripe that looked like a sash, and researching where El Salvador was. Through such material, we were granted a window into the rest of the world. 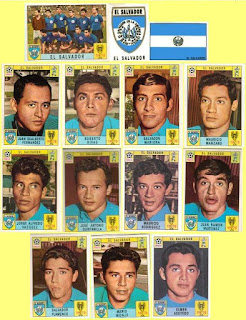 Boys are collectors. or at least back then we were. Just look at our obsessive record collections for evidence. (Music, that second ubiquitous developmental stage of the male of the species. See this blog passim for evidence. Now when a boy's ipod or phone memory is full, they just drop some tracks for good to replace them with new proto-ringtones. Sacrilege to our completist mentalities). The act of swapping doubles was a social one. It honed our powers of memory and perception as we recalled that we already had Sabas Ponce of Mexico, but still needed his compatriot Enrique Borja. We learned the value of things, the laws of supply and demand, albeit relative to the ephemera of football stickers. Those that were harder to get which everyone seemed to need for their albums being more highly prized and for which you might be able to extort 20 stickers in return. 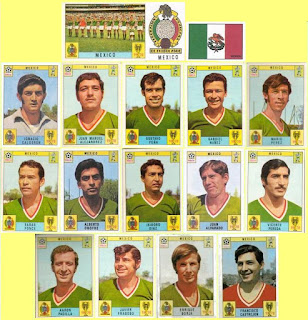 Today, the draw for the upcoming 2018 World Cup will take place in Russia. I've never missed watching one - usually every possible televised game, viewed at work, or through flexible working practices. However, I don't think I'll bother much with this one. My twin boys are all grown up and no longer collect stickers. We graduated through the Panini sticker collections, then the Panini Trading Card collection, not to be confused with Topps Match Attax Trading Card Collection, or even Topps Match Attax England. What's a poor grandmother to do when she goes into WH Smiths and is faced by the gallery of all these sticker/trading card sirens calling out to her? Buy some Pokemon trading cards and beat a hasty retreat from the shop. Then my boys stopped collecting analogues and instead bought packs on Playstation for the FIFA game, hoping to get a Lionel Messi gold card, more rare than even the rarest sticker ever was. These packs weren’t 50p or one pound a pop. Upwards of £20 for something that you couldn’t even hold in your hand. Forums existed to trade them for bitcoins or actual money, so that swapping was no longer a social activity but a remote one. 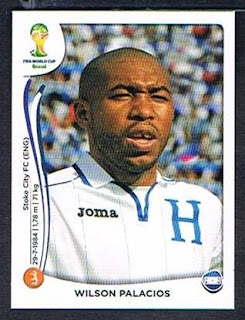 My boys knew every player at recent World Cups through their exposure to console games. They know that Wilson Palacios was Honduras' star player, but they couldn't tell you where Honduras was on the globe; they won't put in the preparation that I did as a boy. There is nothing exotic left about it anymore. Over-familiarity breeds contempt, as I think only dear old closed society North Korea don't have at least one journeyman player plying his trade on Britain's shores. The boys knew the kits. Some of their mates probably wore a Spanish or a Brazilian one in anticipation of nailing their allegiances to the likely winner of the tournament. (I myself have a Uruguay shirt from the 1986 when they were the most violent and underhanded team for quite a while, having a player sent off after just one minute of the game against Scotland, but satisfyingly still held the Scots to a goalless draw). Sadly for the younger generations wearing Brazil/Spain shirts, they don't really do irony like my generation. They just do winning.

And therein lies my disillusionment with the sport. Football is uncompetitive, money has seen to that. Yes the best players in the world are widely spread by birth and therefore national team qualification across the globe, but they are so worn out by the demands made on their bodies by the top European teams who pay their wages, few will shine or live up to their potential. Out of 64 scheduled games, I confidently predict only 5 will be worth watching and the Final will not be one of them. The commercial overkill means all the media outlets will be trumpeting it as "64 earth-shattering" games (Talk Sport Radio trailer from South Africa 2014). Here's my tip for you, don't make a date to watch any games involving Switzerland, Sweden, Saudi Arabia, Panama, Portugal (despite the presence of a preening Ronaldo, they play snooze football) and the hosts themselves Russia. 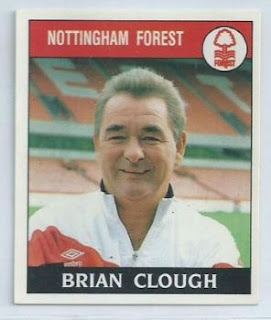 But there will be no escaping it, as there is also no escaping the game wallpapering every home, pub and restaurant by being on a screen in the corner. Football from somewhere around the world is being televised for your viewing pleasure round the clock. Out of our season, you can still watch the US League, or The Copa Americana. Transworld Sport ensures we keep up with football in Indonesia which is handy. Veterans football. Youth Football. Pro-celebrity football. In fact anything but park football, which would at least deliver some interesting characters unlike the anodyne professionals they pitchfork in front of the cameras with half an eye on their post-playing career as a pundit. (Oh yes, the TV panels, another reason I won't be watching. Oh for the days of Brain Clough baiting Malcolm Allison). Still at least Peru have finally qualified for the finals again, which means we get to see the best football strip in the world on our tellies. 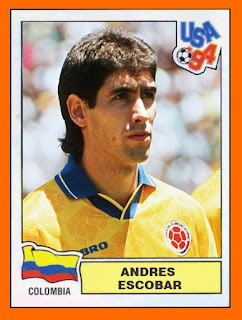 I'm not even going to talk about England's national mania. Let's just sum it up by taking a nanosecond to conceive the design of the cheap plastic bowler hats the Sun will give out for you to wear at the giant screenings. There's nothing quite like the sight of thousands of people shouting at a outsized projection screen to make one despair of your own race. Also don't forget to predict the precise nature of offense caused by the newspaper column "10 Things you didn't know about Senegal". Still we only tar and feather our players in the Press. We don't murder them when they fail and in doing so spite the huge bets of cocaine barons like they did in Colombia. Only a game? Andres Escobar, scorer of an own goal against the USA in 1994 RIP.

His books are available on Amazon.