Book – A Spy Among Friends 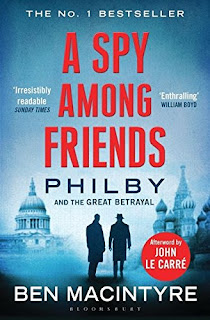 Steve Taylor-Bryant delves back into the espionage and intrigue of the Intelligence community as he reads Ben Macintyre’s A Spy Among Friends: Philby and the Great Betrayal...

My love of non-fiction, especially anything Cold War or Spy related, is well known and I consume so many books on the subject that I tend to not review them for fear of boring you but, on occasion, a book comes along that takes my intellectual breath away. A Spy Among Friends in one such book.

Kim Philby was the greatest spy in history, a brilliant and charming man who rose to head Britain’s counterintelligence against the Soviet Union during the height of the Cold War—while he was secretly working for the enemy. And nobody thought he knew Philby like Nicholas Elliott, Philby’s best friend and fellow officer in MI6. The two men had gone to the same schools, belonged to the same exclusive clubs, grown close through the crucible of wartime intelligence work and long nights of drink and revelry. It was madness for one to think the other might be a communist spy, bent on subverting Western values and the power of the free world.

But Philby was secretly betraying his friend. Every word Elliott breathed to Philby was transmitted back to Moscow—and not just Elliott’s words, for in America, Philby had made another powerful friend: James Jesus Angleton, the crafty, paranoid head of CIA counterintelligence. Angleton's and Elliott’s unwitting disclosures helped Philby sink almost every important Anglo-American spy operation for twenty years, leading countless operatives to their doom. Even as the web of suspicion closed around him, and Philby was driven to greater lies to protect his cover, his two friends never abandoned him—until it was too late. The stunning truth of his betrayal would have devastating consequences on the two men who thought they knew him best, and on the intelligence services he left crippled in his wake.

Harold Adrian Russell ‘Kim’ Philby is probably the most famous double agent in history. His name pops up quite a lot in popular culture when it comes to books, shows and movies on the spy genre, including Doctor Who in the brilliant novel ‘Endgame’ by Terrance Dicks, and it is in shows like ‘Philby, Burgess and MacLean,’ the incredibly well cast ‘Cambridge Spies’ and the film adaptation of ‘The Fourth Protocol’, along with the exceptional novel ‘The Company’ by Robert Littell that spawned my fascination with the United Kingdom’s biggest traitor.

The aspect of Philby’s life that you don’t get from popular culture interpretations though is an in-depth feel for the man, his emotions, his political make up, or how his treachery actually affected those around him, not just the intelligence communities and the government. Ben Macintyre takes previously unseen documents, personal tales and letters which, with his insights as an historian and journalist, creates an in-depth look at Philby, his colleagues and his family. Covering every aspect from Philby’s birth in India, through his formative years, which play a large part in shaping his life, into his career as both a journalist and a spy through to his admission and defection, all the while writing with a cinematic style and a hectic pace, Macintyre makes A Spy Among Friends read more like a Fleming novel (he’s mentioned a few times in the book) than a historic work of non-fiction. Whilst I was pretty familiar with the subject matter, and especially the friendship Philby cultivated with American spy hunter James Jesus Angleton, I learnt a lot more about Guy Burgess and Donald MacLean than I ever had and marvelled at the depth of knowledge I received into the life of Nicholas Elliot who was just as fascinating as Philby himself.

If you want a beautifully told tale of British spying, Russian defections and drunken parties all over the world then this is the book for you. However it’s also an important book, as it tells you as much information as is possibly available, explains the who’s and why’s, fills in any gaps you may have in your own background knowledge of the events and leaves any mystery still unsolved to be thought through by the reader with all the information at hand. Like did Philby outsmart Elliot in Beirut and manage a swashbuckling defection to Moscow? Or did Elliot force Philby into a corner and then allow the fade so the United Kingdom didn’t have to face an embarrassing trial where no one in power looks good?

I started the book over Christmas, which is the busiest time of the year for me, and read it in 5 short sittings it is that gripping. I always knew Ben Macintyre was an exceptional writer but, with this book, he has excelled and cleared his own very high bar. Plus, the Afterword by John le Carre is worth the cover price of the book on its own.