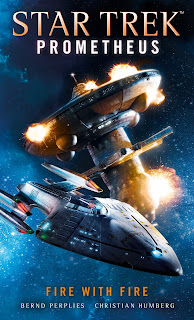 I had such high hopes for this novel - after the crushing disappointment with the state of Star Trek literature that I had been suffering for the past several years, the promise of a 'new ship, new crew, [and] new adventures' had made me think that this could the reinvigoration that the novels needed. I've not outright enjoyed a Trek novel since David Mack's Destiny trilogy in 2008 - the rebooted DS9 relaunch isn't the same, whilst the ENT, TNG and VOY relaunches are just dry. Star Trek: Vanguard was the leading light in the novels - but that was a limited series, and the follow-up, Star Trek: Seekers, never scaled the same dizzy heights of enjoyment.

It's unfortunate then, that Star Trek: Prometheus has its problems. It's been translated from the German original into English - and unfortunately this shows on many occasions. The prose is sometimes clunky and unwieldy and when paired with the fact that, on many occasions, there are exposition heavy paragraphs, it makes reading the novel a chore. This is a shame - as at its core there is an awesome idea that reflects the world we exist in today: a top-of-the-line ship sent in to investigate a terrorist attack that appears to have been perpetrated by a group of religious radicals. It is - like New Frontier before it - inspired by the headlines of the day. But unlike New Frontier which limited the description of its ship to 'Ambassador Class' we are treated to several occasions describing the multi-vector assault mode - and unlike the Excalibur's exploration of Sector 221-G, the Prometheus' entry into the Lembatta Cluster rings a little dry.

The characters are interesting - with Jassat ak Namur being the standout: a member of the same race as the terrorists, ultimately facing a moral challenge. But whilst the characters are promising - the alien races (or race, as it's really just the Renao) just don't match up to the Thallonians, Xenexians or the Hermats in the first four New Frontier. I keep harking back to New Frontier - as to me it's the gold standard for novel-only Star Trek series. Challenger had two novels, Gorkon never appealed, Stargazer floundered after an initial promising batch of novels, Vanguard was a limited series, Titan floundered post-Destiny and Seekers started with a pft rather than a bang. However - even New Frontier had it's sins - one of which Prometheus is also guilty of: in the first novel, the prologue features a character who is friends with Kirk and the first hundred pages feature Alexander Rozhenko, Martok and Spock which, at the very least, add something to the plot unlike the insertion of scenes featuring Captain Ro, Quark, Miles O'Brien and Nog and the aforementioned expositionary paragraphs. Not all of these cameos were needed, not all of the expositionary dialogue was required - it seems that, unlike the use of Picard, Jellico and Spock in New Frontier, these were done purely because they could, rather than the needs of the story. It almost seems like an example of 'show, don't tell' is ignored for the worse.


Like I said - I really wanted to enjoy this novel. I had high hopes for it, but ultimately it didn't quite make the grade. For the moment, I think I'll stick to the Star Trek: Discovery tie-in novels.