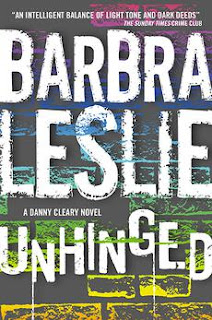 Susan Omand gets hooked again as she reads Unhinged, the final book of the crime thriller trilogy by Barbra Leslie thanks to Titan Books...

Danny used to smoke crack cocaine. But two years ago her sister was murdered and Danny was flung into a wild chase across North America in pursuit of the murderer and his acolytes. Following a tumultuous stint in rehab, Danny and her family have finally found sanctuary: in a converted factory in downtown Toronto decked out in the most advanced security available. Danny is clean, running a gym, and finally free to enjoy quality time with her nephews.

But when the boys’ father turns up one night, beaten to a pulp and with the name of a stripper on his lips, Danny is tangled into a series of secrets that will lead her to the final showdown and a discovery of the ultimate betrayal…

Yes I will admit, it took me a little while to get round to reading this book, which came out in November but, when I did start it, I finished it in a couple of days and wondered why I had left it so long to read it!

Unhinged is the final book of the Danny Cleary trilogy but it works well as a standalone story too because you don’t need to know too much about the characters backgrounds to get hooked into the action. Having read the previous book (see my review of Rehab Run here) I knew the style of writing to expect – modern, fast paced and graphically violent but with strong, easily likeable characters and a convincing story that kept the pages turning without ever feeling like it dragged. I was very pleased to see too that an issue I had had with the previous book, that it contained too many specific spoilers from book 1, has been toned back a lot this time and, although the events of the previous books are mentioned for context, not nearly so much is given away about the who’s and why’s so you would still be able to go back and read the rest of the series with enjoyment if Unhinged was your introduction to Danny and her family.

However a previous niggle still remains with this book, not that it affected my enjoyment of it much at all, but it seemed like everything was tidied up a little too neatly for me in what felt like a bit of a rush to get to the ending. I know the book is fast paced, and works well because of it, but I felt that some corners were cut in the plot, relying on just one too many “convenient coincidences” explained away than was necessary to tie some of the characters to their roles in the story as it all unravelled – I don’t want to give the game away though so will not go into specifics because, like I say, it was just a niggle.

All in all, a great fun murder mystery that is an ideal relaxation from the stresses of the holiday season. I found myself thinking, on finishing the story, that I will miss Danny and her family if Barbra Leslie doesn’t revisit the characters in another book, but this trilogy has definitely got me reading modern crime fiction again, after a long sojourn for me into mid-20th century noir, and I will look forward to seeing what Leslie produces next.