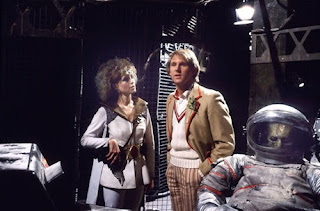 Our Doctor Who expert, Tony Cross, is journeying through all of time and space to bring us his thoughts on every available Doctor story. Today is the Fifth Doctor adventure Terminus...

Terminus: it's a bit of an odd one. There are things about it I love.

I like the Vanir, especially Bor (Peter Benson) who might just be one of my favourite minor characters in the entire programmes history, at least so far. That lugubrious cynicism is wonderful & unusual in Doctor Who & his line in the final episode about 'hoping for something better on the other side' is delivered to perfection.

I liked Sarah Sutton's departure, which seems right for the character. Although with the amount of clothes she was shedding as she went along there was a danger - if that's the word I'm looking for - of her ending stark naked. The idea of Nyssa staying on Terminus where she can use her skills to do some good, both for the Vanir and those suffering from Lazar's disease. For me I think Nyssa is the best of the Fifth Doctor's assistants & the little peck on the cheek she gives him as she departs has as much emotion in it - for me at least - as any amount of weepy snogging from the modern series.

I like the first two episodes, where the story builds quite well but in the last two episodes it doesn't really go anywhere. It ends up feeling like a tale designed simply to get rid of Nyssa. I think part of the problem is that the story gets confused by what scale it should be operating on.

On the one hand there's an excellent story about plague, privatisation & slavery that feels intimate & personal, as when we learn that Olvir's sister was bought to Terminus & when we hear Inga (Rachael Weaver: who isn't actually that good I'm afraid) talking but then there's this ridiculous grand plot about Terminus being at the centre of the Universe & responsible for the Big Bang. If Terminus goes, the Universe goes, which seems too big when wrapped around what to me is the centre of the story: the survival of ordinary people against indifference.

Surely the damaged engines threatening to destroy Terminus itself would have been threat enough?

At the same time the Black Guardian arc is running through the story so periodically Turlough has to go off & have a chat with his 'employer', which makes things a little awkward. Especially as most of the rest of the time Turlough gets stuck with Tegan in some underfloor ducting. In fact Mark Strickson seems to spend a large chunk of this story looking at Janet Fielding's arse.

Then there's the Garm. Ah. A large man with a giant Yorkshire Terriers head waddling about the place trying to look terrifying & dignified. It just doesn't work & unfortunately is a real kicker to the credibility of the story, if you get upset by that kind of thing. Annoyingly I think there's an interesting character trying to get out of the Garm, who is as much as a slave as the Vanir & as much a victim as the Lazar's themselves.

I should also throw some credit the way of Andrew Burt (Valgard) & Tim Munro (Sigurd) who with Bors make up a fine triumvirate of Vanir performances. Dominic Guard as Olvir & Liza Goddard as Kari play abandoned soldiers in some very 60's sci-fi costumes: all white & shiny. They do a competent job. Nothing more, nothing less. In fact Olvir & Kari seem to have been dressed for an entirely different television series. So when they appear it is as if a couple of cast members from some slick space opera wannabee have stumbled into this dirty, rundown thing by accident.

So Terminus has some good, some bad bits. There are some good lines & some clunkers. And can only be described as either average or mediocre depending on whether you're a glass half full or half empty type.