Doctor Who - Twice Upon a Time 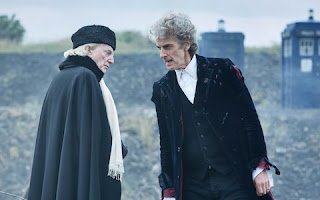 “709 Episodes ago” states the text on the screen as we see William Hartnell morph into David Bradley almost seamlessly and off we go on a multi-Doctor yuletide treat that appears to be 51 years in the making. Picking up from the end of 1966’s The Tenth Planet we see the First Doctor, with a recast Ben and Polly briefly shown, wandering around in the snow refusing to regenerate, just like Peter Capaldi’s Twelfth Doctor and we are back where we left Doctor Who at the end of The Doctor Falls.

Going into Twice Upon a Time I had very low expectations. I had gone from uber Moffat fan to Moffat apologist to someone who watched Doctor Who reluctantly in a very short space of time. I’m not like the majority of fans, I didn’t think Capaldi was the best Doctor since Tom Baker, I didn’t think all he was lacking was good writing. I thought, in small periods of episodes, he showed a Doctor that could have been great, normally when he was doing righteous speeches, but in the main I thought of him as a tribute act, a parody of everything that had come before, an actor who undoubtedly was a huge fan of the show but that paraded all he loved of the other incarnations instead of making the character his own, and not all of that blame can laid at the feet of writers. I didn’t go into Twice Upon a Time full of held back tears for a Doctor that had wormed his way into my heart in fact, due to the fact that, in my opinion, one of Doctor Who’s worst ever writers was taking over as showrunner, I went in with my lifelong love of the show at rock bottom and my hopes for the future almost non-existent. The only thing that is going to make me give Chibnall’s first season a go is the fact that he is doing something brave and he is doing it with Jodie Whittaker, an actress I admire greatly. What could a Moffat, who hasn’t been consistently great since Matt Smith’s first season, do to entertain a tired fan on Christmas Day? Well, he could write certainly the best episode he’s written in years and he could give me a non-surprising but lovely story that warmed a little of my cold, dead heart.

Both Doctors were thinking very deeply during this Christmas special, asking whether they really want to go on, the First due to the Testimony announcing him as the Doctor of War, a title he hated and a future he no longer knows if he wants to live through, and Capaldi’s Twelfth wondering if he deserves eternal rest now, whether he’s too tired to go on saving the universe. Both seem agitated and bored of the evil with the First even pondering how good can prevail when evil is more equipped to survive, and the surprise and almost happiness of the Twelfth when he realises the Testimony don’t have evil intentions, in fact they are doing something quite wonderful by preserving memories of those about to be deceased, including giving back Twelve his memories of Clara (cue Twitter meltdown full of irrational hatred for Jenna Coleman). With Mark Gatiss as The Captain, falling foul of some timey-wimey Moffaty-woffaty story twisting we get nods to the Lethbridge-Stewart family, and we also get a message of peace, goodwill, the setting aside of differences and a beautifully shot Doctor Who version of the Christmas Armistice played out in 1914 Ypres. Yes, some of the ways we got to the important message were typical Moffat, multi-Doctor face appearances, timeline readjustments to drive plot and narrative, but at the end we find a Moffat that I genuinely believe gave us a great rendition of Christmas spirit and a very apt message for the world of instant hate that we currently live in.

All in all we saw Moffat trot out his Greatest Hits, but I have no problem with that. I have liked more than I have disliked during Moffat’s era of the show and he leaves with a salute from me, but I also saw the best of Capaldi, I saw the speech Doctor, the arrogant man preaching to the world about what they should do or not do, and in my opinion that is when Capaldi has shone in his short TARDIS career.

Never be cruel, never be cowardly, and never, ever eat pears!

Doctor, I let you go…

And we as fans have to heed that message as we have all done throughout our lives as fans. Let OUR Doctor go and embrace the new one. I had to do it with my Doctor, Colin Baker, in more trying times for the show than the sex of the actor, and we have to all look forward to not only the next Doctor, but our lives in general with less hatred and negativity. As fans we are some of the most passionate on the planet, but we are also capable of so much bile and spew so much hatred and unnecessary anger into the ether as well (don’t believe me? Go check social media after Clara’s return, and check again fifteen minutes later when Jodie makes her bow). We need to give up being so possessive over something that isn’t ours, we need to check out the new version of Who when it airs and, if we like it, say so and keep watching, if we don’t, instead of adding to the worlds ever growing depressive anger, let’s just change the channel. Twice Upon wasn’t a classic, but it was heart-warming. It was pretty well written considering the massive changes that are coming, and pre-regeneration it was good fun at the same time as being thought provoking. Regeneration time, and post-regeneration were a bit too “we’ve seen this before.” I’m not sure a sexist First Doctor was required, and if it was, I’m not sure it was required beyond more than one of the ‘woman needs to dust the TARDIS’ jokes, the parody of men in the 60’s went beyond message and became squeamish to watch after a while. It’s still the best Christmas episode for a while, it’s still one of the better final Doctor episodes for a while, and I think Moffat went out on a high.