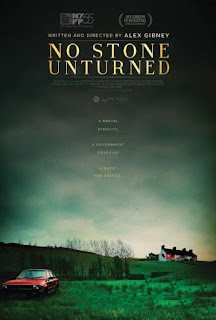 Ireland’s victory over Italy at the World Cup in New Jersey in 1994 remains a source of Irish pride. But it is haunted by memories of a massacre. On the evening of June 18th, 1994, in a pub in the small village of Loughinisland in Northern Ireland, six men watching the World Cup game were shot and killed by two balaclava-wearing men, and five others were injured. Remarkably, no one was ever charged for the crime. For more than twenty years the victims’ families have searched for answers. Now, at last, they have found them, but what they learn turns a murder mystery into bigger inquiry relevant for us all: what happens when governments cover up the truth?

In the film, Claire Rogan, the widow of one of the victims, recalls being told by authorities that there would be “no stone unturned” in bringing the killers to justice. “I don’t think they ever lifted a stone, never mind turned it,” she says.

With No Stone Unturned, Oscar-winning director Alex Gibney whose powerful investigative documentaries include Taxi to the Dark Side, Going Clear and Enron: The Smartest Guys in the Room, sets out to uncover the truth behind the Loughinisland Massacre and reveal why the case was not properly investigated. He ignites a fire under a cold case and a black mark on local police and British government.

Families were torn apart. Lives were ruined, or upended. Yet no one has even spent a single day in prison for this heinous crime. There was never any doubt about the motivations for the shootings - the Ulster Volunteer Force, the most powerful of the pro-British protestant militias and foes of the Irish Republican Army (seeking reunification with Ireland), had waged a long and bloody sectarian battle against Catholic interests in Northern Ireland. But rural Loughinisland had been, for all intents and purposes, set apart from the brutal sectarian battle zones in Belfast and Derry and along the Border with the Irish Republic. “You couldn’t have picked any more innocent,” says Aiden O’Toole, who was tending bar that fateful night, and became one of the wounded himself.

Through interviews with victims’ families, former terrorists, officers of the Royal Ulster Constabulary and other government officials, No Stone Unturned puts flesh and blood on a story that some would prefer to remain buried. By connecting dots on official documents, navigating previously uncharted leaks of information, and putting together what would be a prosecutor’s dream – or nightmare -- Gibney connects the dots between mass murder and official malfeasance, between memory and sanctioned amnesia. The results are guaranteed to shock, appall, and resonate most resoundingly and hauntingly with audiences worldwide.

“The cover up was staggering in terms of its breadth and audacity, especially given the kind of evidence that was at their disposal. With the documents we were able to go through and make connections that were never able to be made before. And once that happened, we were able to dig a little deeper,” says Alex Gibney.


No Stone Unturned is a Fine Points Film in association with Jigsaw Productions and Kew Media Group, available on all major VOD platforms in the UK from Monday 8th January 2018.