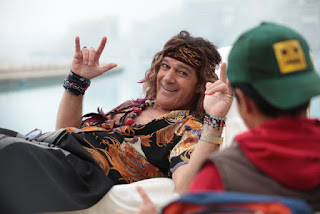 Ex-rock star Turk Henry (Antonio Banderas) is easily brow beaten into visiting Chile by his ex-supermodel wife Sheila (Olga Kurylenko), the woman that music journalists branded the new Yoko Ono who cleaned up Turk’s drug habit and ended his band after a string of hits such as Teenage Ass Patrol. When the odd couple get to Chile, Sheila wants to take a hike into the mountains whilst Turk wants to stay at the freezing pool drinking beer and wondering why July is winter time in Chile. Sheila is kidnapped by some first time Chilean pirates who demand a million dollar ransom from Turk for her release. Turk, a drunk who doesn’t like to do things for himself, enlists his agent John (David Mitchell) to help but he is otherwise engaged, stealing his clients’ money we later find out, and so it is left to assistant Marybeth (Aisling Loftus) to come to Chile and try and help the hapless Turk get back his wife, using the freelance kidnap specialist Clive (Martin Dingle Wall) to help with logistics. Getting in their way though is an American embassy worker who dreams of leaving the dirty disgusting Chile for Washington and invents a terrorist conspiracy involving the pirates so that he, Ben Harding (Mark Valley), can be the hero and get the promotion he wants.

I’m not sure what I just watched but it certainly wasn’t anything touching comedy gold. I’m not even sure I was supposed to take it seriously as a film but I’ll be honest –I couldn’t stop watching it. No matter how daft the plot points got, or how a joke and punchline got stretched until it was uncomfortable, I couldn’t stop watching. It was almost like a homage to bad British comedies, a ‘Carry On up the Ageing Rock Star’ if you will. The script was loose, the jokes rehashed, the set pieces all too familiar from other films, but somehow director Simon West and the cast just seem to pull off the impossible; they make what should have been a two minute sketch on a late night comedy show last over an hour and half and, by the end, you are relentlessly beaten into enjoying yourself, a feeling I’m not sure I care for but what the heck I had a little fun for a split second of my life.

This is a poorly thought out attempt at comedy that somehow works. Antonio Banderas has obviously fallen on hard times and needs the work but you can tell he is having a blast playing Turk Henry. Most of the poor script falls at his feet for him to rescue and he makes the majority of things work but I just hope that was actual beer he was consuming throughout so at least he got a buzz alongside whatever money they paid him to stoop so low. Not even David Mitchell could lend any credibility to this film and, in fact, his story continues through and after the end credits showing that no one at any time during the creative process had the balls to say “no, we’ve gone too far now, let’s rein it in.” If you happen upon Gun Shy in a legal way of watching it for free then, honestly, it's worth unplugging your brain for a couple of hours and giving it a watch. You’ve seen it all before and done better but Banderas is worth watching in most things and makes penis jokes almost funny in this. Under no circumstances, though, should you pay good money to see this film, I don’t want you encouraging any kind of sequel and boy did they leave it where they could actually make a sequel.

Available to stream if you do want to pay good money to see it.