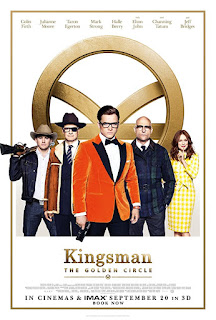 Now available on DVD, Steve Taylor-Bryant took on the Kingsman sequel and stepped into The Golden Circle...

When the Kingsman headquarters are destroyed and the world is held hostage, their journey leads them to the discovery of an allied spy organization in the US called Statesman, dating back to the day they were both founded. In a new adventure that tests their agents' strength and wits to the limit, these two elite secret organizations band together to defeat a ruthless common enemy, in order to save the world, something that's becoming a bit of a habit for Eggsy...

The problem with sequels is that the film must take what came before and better it whilst being able to stand on its own merits, which begs the question why they even thought a sequel to 2014’s Kingsman: The Secret Service was a good idea. Hadn’t the bar been set too high for any sequel to clear? Well, kind of. I really enjoyed The Golden Circle as a sort of send-up of action films, a couple of hours of humorous James Bond style clichés played out to their most uncomfortable limits, but as a written piece it wasn’t a patch on the first.

There were no shocks or twists in the plot this time around. The two things that worked so well in the first film were Samuel L. Jackson’s Valentine, I’ll get to the villainy in short order, and safe reliable old Colin Firth going postal in a right wing church. Firth shooting people in the face in a religious building was both shocking and beautiful, a wonderfully played out scene by an actor going against type in the most brutal of ways. You didn’t have that in The Golden Circle. You expected Merlin and Eggsy to do what they did, you expected the American version, Statesman, to be a parody of the Wild West and, if you’re really honest with yourself, you expected Elton John to swear a lot.

You also expected the evil plot that affects millions of innocent people, you expected some to care and others not to and you expected this because it was all set up in the first film. But in the first film you also had the shock of Colin Firth, massively lacking in The Golden Circle, and you had Samuel L. Jackson who you knew would be a good villain but you didn’t know how good. Instead, in The Golden Circle, you have the villainy of Julianne Moore, who I like more as an actor but I don’t ever think of her as either villainous or funny. Perhaps this was the big twist, perhaps Moore was going to be incredibly evil and really funny, playing against type like Firth before her. No. Moore is watchable but whiny rather than hilarious, a bit too "usual film fare." Yes she put Keith Allen in a mincer but apart from that there wasn’t much else to add depth to her character. No back story, no evil plot other than infectious drugs holding drug takers to ransom, no really good quips, no sense of an ideology or reason other than "she can do, so she did."

So Kingsman: The Golden Circle got nowhere near the heights of the first film, verging in places on Austin Powers rather than James Bond, and as a sequel it doesn’t quite work but as a stand-alone comedy action vehicle it’s okay, I didn’t hate it. Mark Strong was excellent as usual as Merlin, Halle Berry as Ginger was great, I loved Jeff Bridges as Champ, but not every casting decision was great, again unlike the first film. I think that we could have done with more of Channing Tatum’s Tequila and less of Pedro Pascal as Whisky, perhaps a role reversal would have been better, but it’s been left for Tatum to come in and steal a third Kingsman film for himself so that excites a little. Just please no more Elton fucking John.