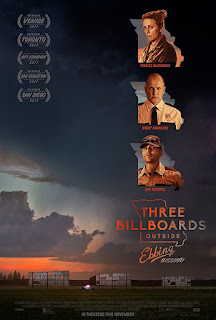 First let’s doff our reversed baseball caps at the stellar performances by the cast’s principals: Frances McDormand, Sam Rockwell and Woody Harrelson. You know McDormand is always going to be strong, but this is probably the best role she’s inhabited. Harrelson gets better and bears more gravitas with age, while Rockwell has a face made for roles of goons gaining their first insight into the world that doesn’t involve their fists.

Mildred Hayes (McDormand) has had her teenage daughter raped and murdered a year ago, yet there are no suspects and no leads in the case. Driving on the backroad where the act happened, she clocks three dilapidated billboards who haven’t hosted an advert since the new road was put in and cut out most of the traffic on this one. She resolves to rent their space to put up posters calling out the Chief of Police Bill Willoughby (Harrelson) for a lack of action. Such an act in itself is futile, because no one uses the road, but in a small town it gets noticed, talked about and people take sides so that all manner of consequence is sparked off. Willoughby himself is fairly equanimous about it, but one of his good Ol’ Boy charges, hotheaded trooper Dixon (Rockwell) is incensed and thus are the armies drawn for battle.

Dixon is more than casually racist, stirred on by his mother who he is forced to look after when her husband dies. Her character represents exactly why Trump won the Presidential election. Willoughby cools Dixon’s heels, explaining that to be chief of police, you need to love everyone, not have hate in your heart. When Willoughby and Hayes meet to discuss the posters, Willoughby gives a heartfelt explanation of just how the investigation has ground to a halt and how awful that makes him feel. He confides in Mildred he is dying of cancer which might make her reconsider. She replies that she knows he has cancer, which is why the timing had to be now. For this is Mildred Hayes, whipcrack tongue and sharp of mind. She doesn’t pull any punches, verbal or increasingly actual ones.

But words will only get you so far. She sees off the local priest come to protest the billboards with an ingenious rebuttal of everything he stands for by reducing the Church to the status of a street gang with the privilege of not having to exist on the streets. But her own ex-husband comes to protest too and words don’t work on him and as he violently rounds on her, their son has to grab a kitchen knife and hold it to his father’s throat to get him to desist in a shocking tableau of family life. When local citizens formally complain about the posters, the stakes are ratcheted up and we see the first in the litany of escalating violence the film provides. In a scene in the dentist’s chair reminiscent of that of “Marathon Man”, the dentist who is one of the two complainants gets short shrift and a taste of his own medicine as she turns the drill on his thumb. Willoughby goes to confront her about this incident and coughs up blood all over her in a shocking scene of the unexpected internal violence the body can hurl at us too. But in a tender moment, we see the human bond between the two, as she is genuinely moved by his plight. Indeed Willoughby does love everyone in his hardbitten way and even Mildred, his most implacable foe, feels a moment of compassion in return. 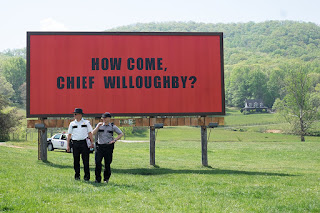 But this is the last such moment until virtually the end, as we move from dentist drills to a mother kicking school children in the nuts, to defenestrations (fortunately this being small town USA, such Main Street buildings are only on two storeys); to firebombing the police station, and the billboards themselves being torched. Usually violence in movies is about establishing indomitable respect, the top dog as the most powerful, staple fare of any gangster movie. Here it is a study of violence wrought by the powerless. Because Dixon can’t express his feelings nor his inadequacies, he projects it out on to others who he beats up. When he loses his job, his first act is to throw the advertising agency boss out of the window and give him a kicking, because he blames him for everything that’s happened up to the point of getting fired from the police. Mildred is possessed of the words at her disposal, but since they too achieve nothing, she resorts to moments of explosive violence in her frustration. The inner motivation comes from a similar shame and guilt to that that works inside Dixon. She know she bears some responsibility for her daughter’s death, in the nature of the brutally unhappy last words they shared before her daughter stormed put of the house that fateful night.

This is a fascinating study of small town America, in the grudges, jealousies and enmities that lurk and the violence suspended just one notch beneath the surface and which can be exposed at any moment. Because of Dixon’s previous record of racism in his treatment of Afro-Americans in custody, the Afro-American who originally put up the posters for the advertising agency, demonstrates which side he’s on by unprompted supplying Mildred with copies of the posters after the billboards are burned down. It was her ex-husband and not the fired Dixon who burned down the billboards, which sideswipes her expectations. Willoughby himself secretly pays for another month’s rent on the billboards when Mildred looks like she can’t afford the upkeep. An act of generosity, but also one which keeps the conflict going posthumously and stokes the fires further. But for all the large canvas of violence, the film is utterly nuanced, as surprising alliances are forged, if people demonstrate the love for their fellow man espoused by Willoughby. A severely burned Dixon ends up in the same ward as the man he threw out the window, but the man shows him an act of kindness in getting him a drink. Dixon himself puts his body on the line to try and get some evidence to nail a suspect who he has worked out to be the likely rapist. He forges a new bond with Mildred as she recognises where his heart is in trying to help her in her quest and even when the evidence returns that the suspect is not a DNA match, the two decide to go pay the man a visit since he is almost certainly a rapist anyway. They load a gun into the truck as they set off, but in their bond resolve that they won’t decide on the punishment until they get there and see how they feel about things. The perfect expression of violence erupting through emotion; feeling slighted, cheated, jealous, shamed, emasculated or whatever. This small town justice is not built on any sounder principles than how you feel in the scale of things, whether you reckon you’ve had a fair share, or somebody else’s is getting your dues. And thus are we back to Trump’s electorate… Masterful film making.