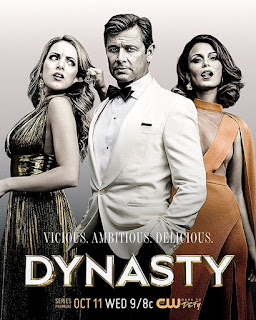 For Joy Day, Paul Robinson looks forward to possible new directions in an old favourite with the reboot of Dynasty...

I am almost 36 - of an age where I'm just old enough to remember the original Dynasty when it was on in the eighties. And those were the crap seasons where the story elements became just a bit too whimsical. The best part of Dynasty though was always Joan Collins as Alexis - and the highlight for me was always the scenery chewing that surfaced any time she shared a scene with Stephanie Beacham (Sable) or Diahann Carroll (Dominique). I was never a fan of Krystal and the show's first season (watching on DVD) is an incredible chore - the contrast between the Carringtons and the Blaisdels only serves to underscore how monumentally boring the Blaisdels are. At least they had common sense to dump Matthew and Lindsay - and allow the Claudia character to grow.

It's not a surprise then that I am finding the new Dynasty incredibly addictive and one of only three 'must-see' shows on television (or Netflix at the moment) - thankfully in no part to the abandonment of Matthew Blaisdel after a single episode, and the complete absence of Lindsay. Josh Schwartz and Stephanie Savage have clearly considered the elements that were crucial to the original and the old elements that just didn't quite work as intended and could be jettisoned. Sammy-Jo is introduced in the pilot and is now male, though remains a love interest for Steven (the original, portrayed by Heather Locklear, doesn't debut until the original shows second season) and the newly christened Cristal shares much more with the original Alexis than the original Cristal. Jeff Colby is less of a fool in love - having inherited the original Cecil Colby's manipulative streak - and the introduction of Monica (who doesn't appear until the original sixth season, and doesn't feature as a main character in Dynasty until the ninth season [after two seasons as a regular in The Colbys]) and the cementing of her as Jeff's sister (not cousin, as in the original) and the additional alterations to the Colbys backstory adds an interesting new dimension to events that parallel, to a limited extent, the originals.

We have met Thomas Carrington - and had a very overt discussion about Adam Carrington. We have been told that Jeff hates Blake because his mother had an affair with him which caused his father (this version's Cecil Colby) to go to prison - but I suspect that the "Mr Carrington" in question will turn out to be Thomas, and not Blake. Blake may turn out to be Jeff's brother - not his father as has been suggested (signposting the 'father' angle so early is surely a red herring - and equivalent to the Fallon/Cecil possibly being father/daughter in the original). Whichever direction that thread goes, it will be an interesting and uneasy development for the Jeff/Fallon relationship: she's either his sister, or his niece in the 'affair' scenario. But I'm not entirely sure a CW show would go in THAT direction - so it's likely to be an even bigger red herring and there's a Miles or a Bliss out there somewhere.

Or perhaps this is the way that they introduce Dominique - she was, after all, Blake's half-sister in the original.

And then we've got the new Alexis' arrival in Episode 16 to look forward to - played, I'm sure effortlessly, by Nicolette Sheridan. Famous for both Knots Landing and Desperate Housewives - Sheridan's casting was not one I was expecting but when revealed was one that fit perfectly and one I am eager to see play out on screen. I look forward to her interaction with Sammy - the duo's interaction was fantastic when Sammy-Jo debuted in the original show: Alexis' protectiveness of Steven, and Sammy's joi-de-vivre and initial romantic attachment to Steven will no doubt be replicated. I can only hope that Alexis' entrance in the original, Jeff's 'Who's that?' and Fallon's reply of 'That's my mother -' is recreated this time round with Steven and Sammy. But exactly what will bring Alexis back into the fold - at first I thought it might be that the funds being channeled through the boxing club were being sent to Alexis, and not Detective Stansfield as seems to be the case. Perhaps it's still the case - it would certainly tie into Blake paying her money to stay away from the children for some event we don't yet know. And will she turn up with the recently mentioned Adam in tow? We certainly haven't heard any rumours of him being cast - though it might have been done in secret.

I suspect that with Alexis due to arrive in a few weeks, that Jeff's mother may not be far off - and whether she will be a Francesca Scott (the originals biological mother) or a Sable Colby (his step-mother) or an amalgamation of the two will be interesting to see. Either way: Vanessa Williams is only one year younger than Hakeem Kae-Kazim who plays Cecil, so she'd certainly be my pick to play the presently unseen Mrs Colby.

Whichever way the casting goes and wherever they go with the plots - I am excited to find out.