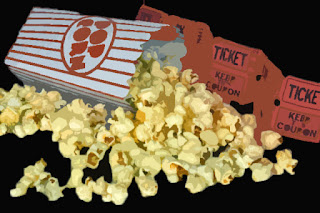 The Defective Inspector rounds off our day of all things joyful to brighten the dark days of January by giving us his choice of five... er... six uplifting scenes from movie history. [Just got something in my eye, honest - Ed]...

It is really hard to find a good movie which is entirely filled with joy. Without conflict, strife and challenge it’s difficult to imagine a movie worth talking about! But every so often there are scenes which have a strangely uplifting effect on my soul and those fill me with joy no matter the circumstance. Below are 6 of those scenes that I plucked from the air between my ears. Why 6 you ask? Well it was 5 but I needed to add the last one… SPOILER ALERT

The Terminal: I Will Wait.

The Terminal is a moderately successful movie where Viktor Navorski (Tom Hanks) is required to remain in immigration limbo following chaos breaking lose in his country. This crack in the law does not allow him to return to his home country or leave the famous JFK airport. While there are heart-breaking moments shattered throughout, the iconic montage of Viktor building his new life is just wonderful. He learns how to speak basic English through sitcom books, assembles a bedroom in an abandon portion of the airport and earns food income by peddling abandoned suitcase trollies. All the while insisting he “will wait” so he can complete his elusive destiny involving a peanut can.

Lilo & Stitch: This Is My Family

Lilo & Stitch is one of the surprisingly good movies of the 00’s when Disney took a plummet in quality. Stitch, a strangely cute abomination made by a fat alien, is stuck on a Hawaiian island with a little girl named Lilo. Lilo comes from a broken family, her parents are long gone and her sister Nani is frantically trying to hold everything together and in a futile attempt to ensure Lilo is never lonely Nani adopts Stitch the “dog”. Eventually Stitch is caught by a galactic force due to his reputation of being a rude, dangerous fluffy death ball but when confronted it is clear he has changed. Before being taken away in shackles he politely asks to say goodbye to his family and explains despite it being small and broken it is still worthy of love.

The Hobbit: Why The Halfling?

The Hobbit was a mixed blessing for everyone involved. It allowed great actors to return and the franchise to remain alive for another generation with variable success. However, there is a scene within the first movie “An Unexpected Journey” where Galadriel approaches Gandalf and asks him why he plucked Bilbo Baggins of all half-people from the Shire to break into Erabor. His speech will touch the heart of every man woman and child affirming the strength in kindness and love. This moment resonates Tolkien’s hope for the future and can’t help but make you feel all warm inside.

One Flew Over The Cuckoo’s Next: Chief Bromden Leaves

Strangely this moment is a little bittersweet. You see at this point Jack’s character McMurphy has just been lobotomized and Chief Bromden murders him in a euthanasia type fashion. The reasoning is somewhat sound, he kills the character with the certainty that he would not want to live as a lifeless husk of a man and Bromden is the only person willing to take the action needed. Once the deed is done he rips a water cooler out of the floor and throws it out the window, making his escape possible as a symbol of the confidence now brimming inside Bromden. For a movie that challenges psychiatric hospitals, endless types of mental illness and some pretty tough subject matter it’s impressive to see such a liberating ending.

I am sucker for Robin Williams and to this day I still feel a tear begin to form whenever his name is mentioned, and the movie Dead Poets Society is a great example of why he was so enjoyable to watch. Imagine you’ve spent a large chunk of your life instilling passion into people until it becomes a very part of your being, now imagine it’s ripped away from you on very unpleasant grounds. John Keating is such a man and in the last moments of his newest vocation he has his faith in studenthood restored by a rebellious rendition of “Oh Captain, My Captain”. The once defeated Keating cracks a smile as he goes assured in himself he made a difference.

The Great Dictator: THAT Speech

It’s been thrown around the internet more than any meme I can think of, for damn good reason. Unashamedly I agree with a greater majority and say that The Great Dictator speech is one of my personal favourite moments in movie history. Everyone knows the speech but the basic concept of that moment is simple; following a mixture of amnesia and mistaken identity a Jewish barber is given the opportunity to speak to a pseudo-Nazi organisation. While utterly terrified for a plethora of reasons the Barber decides it is a opportunity to make a difference and gives one of the most inspiring speeches in movie history. Yes, it’s THAT speech.

Images from Amazon.com
Email ThisBlogThis!Share to TwitterShare to Facebook