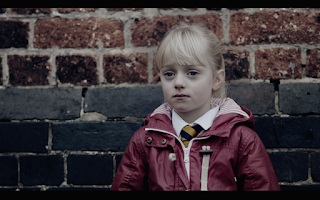 This week, Susan Omand watches some of the short films in the running for the 90th Academy Award final shortlist. This time it's The Silent Child...

The Silent Child centres around a profoundly deaf four year old girl named Libby who is born into a middle class family and lives in a world of silence until a caring social worker teaches her the gift of communication.

That synopsis does not do enough justice to this superb short film. There are so many layers, such depth, to the family dynamic here and it works because of the external force and observational quality of Joanne, the social worker, ably played by Rachel Shenton, who also wrote the film. It’s through her eyes, mostly, that we get to see both sides of the family’s relationship – both the surface story of the busy mother, the forlorn child, and to feel Joanne’s underlying hope and frustration when she tries to help. The little girl Libby is brilliantly played by Maisie Sly who, especially at such a young age, has got such a subtlety to her performance, able to convey a whole world in one expression. Sue, Libby’s mother in the film (Rachel Fielding) is also a highly emotive performance and I found myself taking an instant dislike to her character, although that out and out contempt changed more to despair after the background of her story started to fall into place.

You see, there is a single scene, almost incidental, between Joanne and Sue’s mother in law, that is a huge lightbulb moment in the film and the plight of Libby becomes not just about her deafness. So much is explained in so little time that it put a whole new spin on the tale for me – that it’s not just Sue’s jealousy of the bond between Joanne and Libby as they communicate where she cannot, that it’s not just that the family is too busy to learn to include Libby, but it feels, to me, that there is so much guilt, regret and denial from Sue being deflected onto the child because Libby’s deafness reminds her of something from her past on a daily basis.

At that point it also became clear that this film is not about the characters themselves, it’s all about Rachel Shenton’s writing; the dialogue, the plot building, the way these characters interact, or don’t, with each other. The way it plays with the emotions of the viewer, constantly shifting your opinion, is all so beautifully put together. I found myself rooting for a particular outcome to the story, even though it would have felt a bit clichéd, and was simultaneously pleasantly surprised and utterly heartbroken when it didn’t happen. That is genius writing.

The stats at the end are surprising too – that 90% of deaf children are born to hearing parents – but I think the message that the film carries for me is about more than the one they mention, which is their hope to highlight the need for sign language use in schools. It’s about the need for inclusion in all parts of life, whether at school, home or in life in general. As far as deafness and the use of sign language, it will take a generation and more, even if schools start teaching it, for the family to catch up unless there are other ways for people to learn it and the encouragement to WANT to learn it. But for me, this film is also about parental responsibility in general – as a parent or guardian you are responsible (whether or not you want to be) for instilling in your child their view of the world, whether it feels hostile or friendly, isolating or welcoming, and for how that child feels they are placed in it, valued, regretted or ignored, because they will carry that initial grounding throughout their lives, use it as benchmark of expectation for others and that will affect everybody’s future, not just their own.