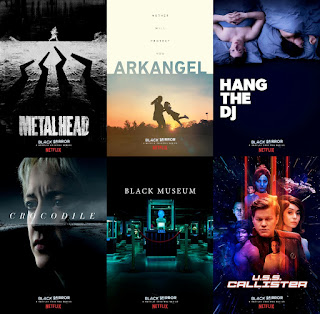 Starting the New Year as he means to go on, Marc Nash reflects on series 4 of Black Mirror...

I watched this second series of Black Mirror to appear on Netflix with the sinking feeling of seeing my favourite punk band having signed to a major record label and surrendered everything that made them interesting as an indie.

There are two major faults with this new series. The first is that each episode is about the drama, rather than the technofear. Series 3 immersed, nay dropped us the audience, right into the middle of the action because we too were threatened by the nefarious consequences of technology, (mainly social media turned up to 11). We were forced to watch like old Dr Who, from behind the sofa, or with through the cracks between our fingers splayed over faces as we readily saw our own fates writ large on screen. There is none of that here. All are stories about the protagonists, from whom we remain detached, outside of and uninvolved. There is no threat implied to us. We become passive viewers. The second failing is that the show, with Netflix money thrown at it, has become obsessed with style. Each episode indulges in a genre, from apocalyptic, to Scandi Noir, to cheesy scifi TV series. But why, the appeal of Black Mirror is that it was like no other show, did not neatly fit into any genre but followed its own rules, instead of pointing up (even if to subvert) the rules of other genres as here. Here the medium is the message, when the strength of the show was that the message is the message. It is an incoherent creative decision, since in the episode “Crocodile” as Scandi techno Noir, set in Iceland, yet all the characters are straight from the North-West of England. That smacks of indulgence. 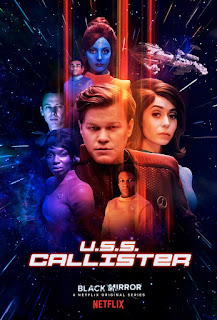 1) “USS Callister”. I really loathed this first episode. A supposedly lovable homage to Star Trek, in the guise of an immersive VR creator who is completely unable to form relationships with work colleagues, so instead gains his revenge by pirating a version of his own tech to create an exclusive Star Trek world where his colleague are all in thrall to his tyranny as he lives out his fantasies. Can they thwart this dastardly baddie’s grip on the kingdom to plot their escape? Who cares, where’s the threat to the rest of us? There isn’t any. It just becomes a plot-bound story as they put their elaborate, many staged escape plan into action. Yawn. The homage element isn’t subtle or particularly lovable either. There is just no light, the baddie Robert Daley is so patently inadequate, that his fantasy life is equally remorseless, he can only act as a madman with no redeeming features to him. 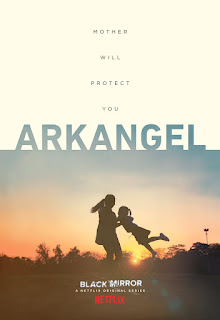 2) “Arkangel” is perhaps one of the stronger episodes, seeing an overweening mother having an implant put into her toddler daughter so that she can be digitally surveilled to protect her from any threat, have all her vitals monitored and crucially, have a parental filter put on her to shield her from unpleasantness. However, as the girl grows into a teenager, the ability to stream her typical teenage activities inevitably leads to conflict. Again, the episode makes it clear this was a limited, experimental technology never rolled out to the general population, so that it is reduced in scale to a domestic conflict of mother and daughter, putting the audience not at the heart of the tension, but on the outside looking in on an unfortunate pair suffering boundary difficulties. A reasonable yarn, but not an unsettling one. Directed by Jodie Foster, but not to any added value I could see. 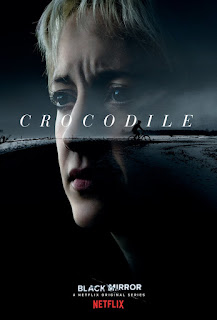 3) “Crocodile” has an insurance loss adjustor armed with the tech to process proper eye witness evidence to overcome the human foibles of recall, a sort of optography from the still living. But when such evidence reveals the psyche of an incidental witness who has herself performed worse crimes than the traffic accident under investigation, all hell breaks loose. Again, it seems to me this is a personal story around the tech, not one that menaces society as a whole. However the lead performance by Andrea Riseborough battles (Wo-)manfully against poorly scripted characterisation, in that we are never let into her mind, so she is left to react to her actions without us really understanding what prompted them in the first place. Again, like Robert Daley she comes over as nothing less than a psychopath. 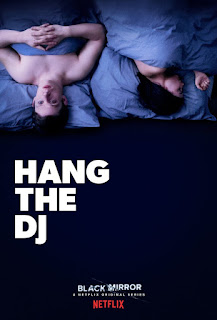 4) “Hang The DJ”. Siri, buy my grandma a suitable Christmas present. Cortana cook an anniversary meal for me and my wife. Alexa walk the dog for me and don’t forget to pooper-scoop. Jeeves locate a prostitute who can deep throat. In the age of Tinder and algorithmic, geo-locator directed affairs of the heart, there’s probably a very good drama to be made from its invidious consequences. But this ain’t it. Sign up to “The One” agency and they pair you with a series of partners in order to thresh your experiences from each one and thus refine your profile until you can be linked to the perfect partner. The personal guidance device named “Coach” will from the outset tell you how long each ‘dry run’ relationship will last, from 12 hours to 5 years. Better to get the sex out of the way up front, so that for those long weekends it’s just a shag, since you know you’re not destined for longevity. For the longer durations, what if the partner is obnoxious, yet you know you’re stuck with them for a good time? Or what if they seem the one, but there’s an expiry date on the relationship? All these scenarios imply interesting moral dilemmas, but they aren’t and you realise you may as well undergo these same experiences the old fashioned analogue way. There is a neat switch on Adam and Eve and the Tree of Knowledge temptation, but really this story is uninvolving (not helped by the lack of chemistry between the two lead actors) and really rather predictable. The twist can’t redeem it by suggesting a different reality from the previous 59 minutes. 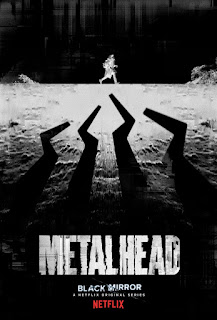 5) “Metalhead”. A post-apocalyptic world which is shown but never really built. Most of the humans are gone, though buildings still stand and the electricity is still on. Only colour film stock doesn’t seem to have survived, as this episode is shot in black and white, to no discernible purpose. When a pair of dead humans are shown, they have taken their own lives rather than face whatever the threat to humanity is head on. As to the story, three scavengers make ingress into a storehouse, but in doing so trip the metal guard dog, a sort of canine Terminator, who wipes out two and pursues the third throughout the rest of the episode. It’s no more than a battle of wits, a chase movie and again, beyond who kills who, the audience don’t know what the stakes are for the winner to inherit, thus we are left outside this scenario instead of being compromised by being part of it. The final scene in which we discover what they were originally scavenging for, (and hints at the warehouse end scene of “Raiders Of The Last Ark”), supposedly conveying an emotional weight to the whole piece, but actually is just too risible to do just that. Not even a bravura performance by Maxine Peake can save this one. 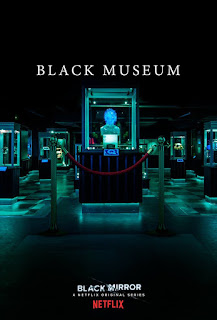 6) “Black Museum”. This was the best of the 6, but even this had its issues. It was two ideas in one which didn’t quite fully do justice to either. The first is the eponymous Black Museum, which contained the fascinating idea that the more recent the crime being commemorated in a museum exhibit, the more it was a crime of the hubris caused by medical technology trying to manipulate human consciousness. This is a great idea, but the approach to it was done by the museum curator narrating three stories behind three of the exhibits, so we get three case studies. The first being that of a surgeon who is given an implant to make him empathic with the unknown causes of pain in his patients through a neural net placed on them, so as to better operate on their pathologies. He becomes addicted to the pain of others, but this build up of the addiction is all done through narration, rather than having the proper time to build up and be more of a drip-fed reveal. (I can’t help feeling this should have been a stand-alone episode that took its time to deal with its theme). The second case study is more successful, a wife in a coma has her consciousness implanted into the unused part of her husband’s brain (insert your own joke here), so anything he sees, touches or tastes she also experiences, including hugging their son. But they develop the irritations and grievances of the long-term married and the husband secures a ‘pause’ function. It does have a poignant ending and of all the storylines this is perhaps the most satisfying. The third case study would have been powerful, only I guessed its twist long before it was revealed which somewhat defanged any affect. However, the episode’s two lead performances were strong, from Douglas Hodge’s slimy medical salesman-cum-carney-show-impresario and Letitia’s Wright as his seemingly chance museum visitor. This was also the only episode where the central song made any sense as a motif of the drama.

All in all a hugely disappointing outing. This had the feel of a mildly diverting “Tales Of The Unexpected” meets “Twilight Zone”, rather than the previously laser-like prescient critique of our own near-future lives. These never really rose above being small human dramas, instead of the social level of involvement of the previous series. And as dramas, you might not have guessed the exact nature of the twists, but you knew one was coming. I hope Charlie Brooker hasn’t lost his touch, but none of these suggested his hand on the pulse of the future directions of technology as he has always previously evidenced.