Doctor Who - Planet of Fire 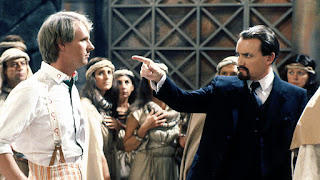 Our Doctor Who expert, Tony Cross, is journeying through all of time and space to bring us his thoughts on every available Doctor story. Today is the Fifth Doctor adventure Planet of Fire...

Planet of Fire is a busy little story isn't it. The writer Peter Grimwade has to introduce Peri (Nicola Bryant) as the new companion, write out Turlough (Mark Strickson); eliminate Kamelion, dispatch Anthony Ainley's version of The Master AND put together a story that works. The fact that Planet of Fire is enjoyable, if flawed, is something of a tribute to Grimwade's abilities.

Let us start with the flaws: Dallas Adams's performance as Peri's stepfather Howard (in both his 'real' and Kamelionised forms) is pretty wooden & Edward Highmore as Malkon, 'the Chosen One' reflects some of his inexperience as an actor. There's also some terrifically hamtastic face-pulling being done by the silent supporting actors playing the Elders of Sarn, which undermines their authority somewhat. It is no wonder Sarn is packed full of heretics if that lot are the best leaders the place provides. I'd be a bit cynical about Logar if I was being ordered about by a gang of pudgy middle-aged men with over-theatrical responses to everything going on around them.

The exception to that is Peter Wyngarde as Timinov, the Chief Elder and Logar's bestest believer. Wyngarde invests him with a combination of dignity and disappointment that is quite winning. Timinov's decision to die on Sarn rather than leave for Trion in the rescue ship is quite movingly done, especially as arch-sceptic Amyand (played with heroic straight-forwardness by James Bate) makes an attempt to convince him by using Timinov's faith. It's a nice moment and in an odd way reminds me of the scene between President Bartlett and Father Tom Cavanagh at the end of the 'Take This Sabbath Day' in Season One of the West Wing where Father Cavanagh tells the story about the believer that ends with the line: "I sent you a radio message, a boat and a helicopter what are you doing here."

The decision to use Lanzarote as both itself and Sarn seems a good one but only makes the studio sets look conspicuously small and artificial. The Master's TARDIS in 'column' form looks particularly lightweight for example. But the volcanic island serves well as an alien planet and certainly makes something of a change from Buckinghamshire quarries. It also looks stunning when we first see the wreckage of the Trion ship across an expanse of volcanic sand and rock.

Nicola Bryant does a good job in her first story as Peri. It's well-known that the decision to make Peri American - as the decision to make Tegan an Australian - was made by JNT to pander to a possible export market for Doctor Who. Thus missing the point that one of Doctor Who's selling points is its Englishness in a world of American science-fiction franchises. Nicola Bryant is English of course. But hey ho. Her American accent stands up to my basic scrutiny pretty much most of the time. I could here go on about how much Peri's bikini scene affected this - then - thirteen year old boy but I suspect that will freak you out. Nicola Bryant will go on to be put in some of Doctor Who's most revealing outfits, which generally make little sense when clambering about the universe and the bikini probably tops the list. However it does make sense for her to be wearing it. She's about to go swimming and the shots of her in it don't have quite the lecherous quality that the introduction of Mary Tamm as Romana I seems to have. There are moments when you can tell Bryant isn't the world's most experienced actor but she's a bit of a breath of fresh air. Maybe it is the enthusiasm.

Then we come to Anthony Ainley's apparently last stint as the Master. I do like the cliff-hanger that reveals the miniature Master in his little control box that explains why he's going to such complicated lengths to get Kamelion to 'the contact point'. There's something quite interesting about the Master being in peril but still having the balls to try and bully Peri into helping him once the truth of his situation becomes obvious. The Master's end is a nasty one and I'm not sure I'm entirely comfortable with the Doctor just standing and watching. Even if he CAN'T do anything I think he would TRY. Doing nothing is not very Doctor-ish in my view.

Whether the Master will return and how his survival will explained is - of course - for us to find out at another time. [Pretends never to have seen a Doctor Who episode after this one EVER]

Despite its busyness the story still tries to find time to have a debate about faith, doubt and about how myths and history can sometimes end up being the same thing but squeezed between the fundamental needs of an adventure series all that high falutin' stuff gets a bit lost but the previously mentioned Amyand - Timinov scene makes a good stab at it.

It's not a bad story this one despite probably having too much going on. It works better than it should in all honesty and brings us virtually to the end of the Peter Davison era. Next up 'The Caves of Androzani' and poor old Peter bites the dust.