Documentary - The Islands and the Whales 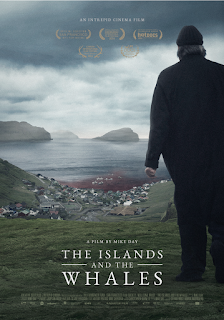 Intrepid Cinema, Cosmic Cat and Dartmouth Films announce the release of their award winning feature documentary The Islands and the Whales in UK cinemas from 29th March...

The pilot whale hunters of the Faroe Islands believe that hunting is vital to their way of life, but when a local professor makes a grim discovery about the effects of marine pollution, and the seabirds populations collapse, environmental changes threaten to change the community and their way of life forever.

The Faroese are among the first to feel the effects of our ever more polluted oceans. They have discovered that their beloved whales are toxic, contaminated by the outside world. What once secured their survival now endangers their children and the Faroe Islanders must make a choice between health and tradition.

Director Mike Day said “This film took five years to make and I'm very excited to now bring this film to UK audiences on the big screen. The majestic landscapes and sounds of the Faroe Islands deserve the full cinema experience, and the story the islanders and the whales have to tell us is strikingly relevant and vital. I look forward to holding Q&As around the country and discussing the film.”

Mike is a Scottish director and cinematographer. Formerly a lawyer, his debut film The Guga Hunters of Ness screened on the BBC in 2011 and at festivals internationally. He founded Intrepid Cinema in 2009 before heading out into the North Atlantic to document the last ten seabird hunters permitted to continue a traditional gannet hunt in the Scottish Outer Hebrides. This was the first time since 1959 that the hunters had allowed this once secretive tradition to be filmed. After two weeks at sea they returned home with a rare glimpse into this vanishing world.

The documentary, co-produced with Day by Henrik Underbjerg, opens on Thursday 29th March, 7pm at Picturehouse Central followed by a Q&A with Jon Snow and Director Mike Day and guest which will be streamed live to UK wide cinemas.